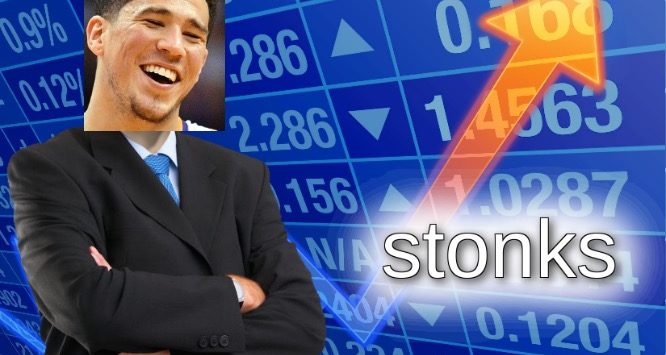 The NBA regular season is close to the finish line. The Disney World ‘bubble’ has largely been a success, boasting zero cases of COVID-19 so far, but many teams have lost key contributors to injuries. The bubble has also brought us competitive basketball games, with players bringing out career performances down in Orlando. In this edition of NBA Stocks and Bonds, we’ll be evaluating the top of the top performers of the restart so far.

Booker has been lights out in the bubble thus far. He’s averaging 31-points, six assists, while hitting half of his shots at a 50.4% shooting percentage. The stats are surely gaudy, and everyone around the league knows how lethal of a scorer Booker can be. Hell, he dropped 71 points on the Celtics as a 20-year-old. What came as a surprise for many was how Booker has impacted winning thus far.

As one of the best players in the bubble, Booker has led his team to a perfect 7-0 record. A lot can be said about the best player on a winning team, and Booker’s play, along with contributions from the top to bottom of their roster, the Phoenix Suns are poised to challenge for a play-in tournament against the eventual eight-seed.

If you haven’t been keeping an eye on Booker prior to the bubble, hopefully he’s opened a lot of eyes. Booker is legit, and even if the Suns don’t accomplish their goal of making the postseason,  they have both young pieces and savvy veterans that will carry over into next season. Booker looks like he’s definitely done with missing the playoffs. Hopefully his love for strawberries doesn’t end up being his downfall.

Lillard’s play so far in Orlando has been breathtaking to watch. Averaging a hefty 37-points a game, dishing out 9.3 assists, and topping that off with back-to-back 50+ point outings, Lillard is out to prove why he is the best point guard in the league.

His missed free-throws against the Los Angeles Clippers only provided fuel to the fire, as the Blazers and Lillard went on to torch their next two opponents. The Blazers have also been one of the best teams in Orlando, going 5-2 in seven games played, which has also catapulted them into the eighth seed.

If that isn’t enough to convince you to put some respect on Lillard’s name (talking directly to you Skip Bayless), Lillard is the only player other than Wilt Chamberlain (basketball reference him) that’s put up three 60-point outings in one season. Phenomenal.

The people have ‘GOATED’ (greatest of all-timed) Warren as the bubble’s best player, and he’s got a case that warrants the moniker “bubble goat.” He’s among the leading scorers in the bubble (almost out-of-nowhere), averaging a smooth 31-points on an Indiana Pacers squad that has been plagued by injuries all-year.

The loss of Domantas Sabonis was huge, but it has allowed Warren to shift to the power forward spot where he can utilize his quickness and shooting abilities to their full potential, as evident in his 51-point torching of the Philadelphia 76ers. Sure he got locked up by the Miami Heat, but without Warren, where would the Pacers be right now?

His impact has been undeniable, and if he doesn’t win the bubble MVP, pencil him in now as a lock for the All-Bubble First Team.

Keep locked in at BALLnROLL for the next edition of NBA Stocks and Bonds. By Friday, the bubble games will have concluded, and from there we will discuss every team’s stock going into the postseason.