Role Reversal, and a Bitter Rival: Raptors vs. Nets First Round Preview

Many Raptors fans remember the infamous series against the Brooklyn Nets in 2014. It was the Raptors’ first playoff birth since 2008. The city was electric with fans across Maple Leaf Square, before it gained the new moniker ‘Jurassic Park.’

Masai Ujiri caught a fine after uttering a curse towards the Nets in an attempt to fire up an already rowdy crowd outside the Air Canada Centre. The teams were incredibly different from back then compared to now. Kyle Lowry is the only remnant of that Raptor squad left, meanwhile the Nets’ roster has completely turned over.

Paul Pierce, Kevin Garnett, and Deron Williams are now out of the league. The Raptors since then have qualified for every postseason, and in 2018-19, they reached the penultimate peak of NBA Basketball.

The Nets on the other hand have struggled throughout the late 2010s, as the trade that landed them Pierce and Garnett backfired as soon as their stars declined and they had no lottery picks to rebuild the team.

Brooklyn had to rely on low-key signings and draft selections to stay afloat, and they slowly but surely built a supporting cast good enough to attract Kevin Durant and Kyrie Irving via free-agency.

Luckily for the Raptors, Durant and Irving will not play in this series, leaving much to be desired for the Nets who have a total of 11 players on their injury list. Do the Nets have a shot against the defending champs in the first round?

The Nets have a shot of winning one game, and it’s game one. They could win the game, mostly because of an extremely superstitious and illogical reason.

In game one of the opening playoff round, historically the Raptors have underperformed, winning one of 12 game one’s in round one. For whatever reason, no matter who is on the roster, the Raptors just can’t get it done in this particular game.

Yes the Raptors have played many of these games in the earliest possible start time, which under normal circumstances could throw off the rhythms of players who are accustomed to playing in the evenings.

Another factor that contributed to the losses throughout the years is the play of the Raptors’ marquee players. Kyle Lowry last postseason posted a positive plus-minus in game one versus the Orlando Magic, but he also didn’t score, and a lot of Lowry slander followed the game.

Since then Lowry has re-written that narrative, especially in his performances in the Eastern Conference Finals and NBA Finals from last season.

If the Nets do win this game, they would have to get a bad game from some key contributors like Pascal Siakam, Fred VanVleet, or Lowry.

Bottom Line: The Nets are Overmatched, Raps in Five 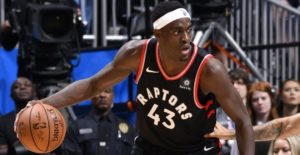 Give the Nets some credit, they played hard during the seeding games and finished with a 5-2 record to overtake Orlando for the seven seed. Still, they don’t stand much of a chance versus the Raptors given their multitude of injuries to key players.

There’s not much to be said about the Nets’ chances of an upset. Aside from Caris LeVert, who has been spectacular in the bubble, the Nets will struggle to find shot creation or playmaking from anyone else on their roster.

The Nets signed Jamal Crawford and Michael Beasley for the sole purpose of alleviating some of the pressure off of LeVert to create offence.

Crawford at this point is day-to-day due to a hamstring injury according to basketballreference.com, and Beasley will not play due to testing positive for COVID-19.

The Raptor defence, which has been elite as usual, should have no trouble locking down the Brooklyn offence given their lack of offensive firepower.

It will be important for the Raptors to disrupt any sort of rhythm LeVert or Joe Harris try to muster up, and it will be especially crucial for a guy like Pascal Siakam to shake off the quarantine rust against the Nets.

Siakam needs to be an offensive weapon for Toronto to truly unlock their championship aspirations this season.

Also look for the Raptors to clean up their offensive struggles in this series. Toronto has had trouble taking care of the basketball thus far in the bubble, and a lot of that can be attributed to rust.

More games, and more court time for the players should be enough to help the Raptors re-establish their offensive chemistry.

Realistically, the Raptors have a chance to re-write their game one demons as they’ve grown accustom to the early start times in the bubble.

Any Raptors fans ever think they’d be uttering the words “defending champs” when referring to the team? It would’ve sounded crazy to think the Raptors could win the title going back six years ago.

We’re now in 2020 and it’s an entirely different world from the one we used to live in. It might not be so crazy to think the Raptors could win it all again, in a year that has be completely irregular and transformative from the get-go.