Back in February, J.R. Smith made a bold statement on his Instagram story. A fan had asked Smith who he thinks will make the NBA Finals. He replied saying the Los Angeles Lakers and Miami Heat would be the NBA Finalists, even going on to say on his post “call me crazy.”

What’s even crazier than Smith’s prediction, was how both teams got here.

The Lakers faced hardly any resistance en route to the NBA Finals. Going 12-3 to make it out the Western Conference, each team they faced had no answer for the LeBron James-Anthony Davis duo.

In the biggest surprise of the NBA Playoffs, the Lakers’ supposed biggest rival in the Los Angeles Clippers collapsed in the second round after relinquishing a 3-1 lead over the Denver Nuggets. The Lakers then proceeded to finish what the Clippers could not, eliminating the Nuggets in five games.

The Heat were also completely dominant throughout their postseason run thus far. After sweeping a depleted Indiana Pacers squad, they went on to demoralize the league MVP and Defensive Player of the Year, Giannis Antetokounmpo, along with his Milwaukee Bucks.

In equally surprising fashion, the league’s best regular season team was bounced out by the Heat in five games. From there, Miami finished off the Boston Celtics in game six to become the Eastern Conference Champions. 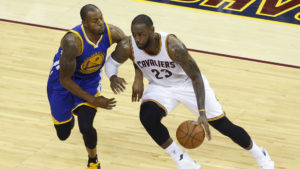 A lot is being made of Andre Igoudala’s sixth-straight NBA Finals appearance, and rightfully so. He joins an elite cast of players to make six straight Finals, and his veteran presence will be key for a lot of players on the Heat that haven’t played on this stage. Igoudala will also be matching up with LeBron James once again in the NBA Finals, making it the fifth such occasion.

New Faces in their First Finals

Anthony Davis and Jimmy Butler have been two of the league’s premier players for quite some time, and both will now be getting their first shot at competing for the ever-so-coveted Larry O’ Brien Trophy. Their play in this series will be closely evaluated and inevitably will be linked to their respective teams’ success (or lack there of).

Young stars will also be getting the spotlight in this series. Bam Adebayo has continued his stellar play into the postseason, and looks to make an impact against a Lakers team that has faced little resistance inside.

Tyler Herro, the rookie out of Kentucky, at just 20-years-old, has earned the trust and confidence of his teammates and coaching staff to make shots in key moments.

Duncan Robinson also looks to make a large splash in the Finals. The former division-three player-turned professional three-point marksman for the Heat could potentially threaten some Finals records from deep.

The play of Lakers’ youngster Kyle Kuzma will also be under a harsh microscope of attention from fans and media, being the only Laker in the playoffs other than LeBron James and Anthony Davis to average double digits in points. 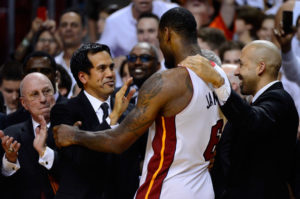 LeBron is very familiar with the Miami Heat franchise. James spent some of his most dominant and successful seasons in South Beach, and now he will be facing some of those former colleagues, coaches, and staffers in the Finals. Pat Riley, Erik Spoelstra, and Udonis Haslem come to mind, as they all know LeBron very well.

It will be interesting to see what defensive schemes Spoelstra will throw at LeBron, considering he knows LeBron’s tendencies and characteristics as a player.

Superstar-led Team vs. A True Team

The Heat and Lakers represent two opposite philosophies in team building. The Lakers have built their team around the superstar talents of Anthony Davis and LeBron James. They’ve filled out their roster with savvy veterans and role player specialists who were carefully chosen to fit alongside the superstars.

The Heat on the other hand represent a team-centric philosophy, where they don’t necessarily have a dominant superstar talent that can drop 30-40 points in an entire Finals series. Instead, the Heat prefer to attack the offensive end by committee. Whether it’s Jimmy Butler, Bam Adebayo, Goran Dragic, Tyler Herro, Duncan Robinson, or someone else, a player usually steps up big for the Heat in their wins.

It must be said that teams with the Heat’s approach don’t often win Championships nowadays. The last team to win the title with a similar team in-philosophy was the 2004 Detroit Pistons. 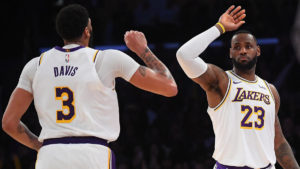 Can the Miami Heat slow down Anthony Davis and LeBron James?

Miami’s ability to guard the superstar Laker duo will be a key factor in the series. Will the likes of Adebayo, Igoudala, Crowder, and Butler be able to show resistance the Lakers have yet to face in the postseason? The early answer to this question is probably yes. Head Coach Erik Spoelstra knows LeBron very well, and he has the personnel in the strong and athletic Adebayo to matchup with Davis.

Where will the Lakers get production outside of LBJ and AD?

The Lakers’ biggest weakness all season has been their ability to get production outside of their two stars. Danny Green has been inconsistent from three, albeit he is still playing stellar defence and leads the team in plus-minus with a +16.4 while he’s on the floor. Kyle Kuzma has been up and down for the most part. The most consistent shooter on this team has been Kentavious Caldwell-Pope, hitting on 42.1% of his 5.1 three point attempts per game.

Who will be this year’s Un-sung Hero?

Every NBA Finals has one player that comes out of nowhere to completely effect the outcome of a game or the series. Will it be a guy like J.R. Smith? Dion Waiters? Kelly Olynyk? Tyler Herro for Finals MVP?

Regardless, there will absolutely be at least one or two impact players that put up a career performance literally out of nowhere.

Miami can pull off the upset if they can somewhat nullify the Lakers’ star duo. If they can do so, they can win a closely-contested seven-game thriller. If the Heat have trouble containing the Laker offence, the Lake Show can end this series as early as five games.

With all that being said, often in the NBA the biggest factor to team success is having the best player on your team. With that in mind, the Lakers should win this series in six games. LeBron James is still the best player in the world, and he will have the chance to remind us, yet again, why he should be the greatest of all time.