Reminiscing on Forgotten Raptors: Thriving in the Modern Era

Basketball has changed immensely since it’s inception as a sport. From being played with peach baskets and soccer balls to where we are today, the ‘space and pace’ era where teams regularly shoot a ton of threes, the evolution of the game has certainly come a long way.

The game has evolved a lot even in the last ten to 15 years. Just look at the evolution of each position. Centers in the 2000s were burly, strong, big, and operated pre-dominantly in the post. Centers in today’s game must be able to shoot the three, or pass the ball, or defend the perimeter in order to have an impact on the floor. It’s not enough to just be dominant in the post anymore.

With that being said, there are plenty of players from past eras that could thrive in today’s game. Reggie Miller and Chris Mullin are two guys who would’ve loved to play in this era, and arguments can be made even for Michael Jordan potentially being even more dominant today.

Here are some former Raptor players who would potentially excel in today’s modern era. 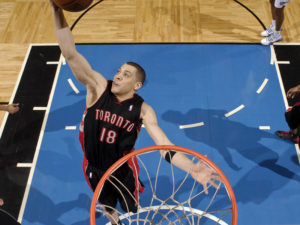 AP was one of my all-time favourite players to don the Raptors uniform. Before coming to Toronto, he had a decorated career in the Euroleague. He was a two-time Euroleague MVP and won the Euroleague Championship three times.

During his time in Toronto, he was a reliable guard to slot alongside Jose Calderon (another Raptor legend). He helped the Raptors make the postseason in back-to-back seasons from 2007-2008. He was a 12-point per game scorer, but he did it on ridiculous efficiency.

Parker was a near 44 percent three point shooter in those two seasons, and his contributions were not just on the offensive end. Parker was also a great defender at his position, averaging about a steal from 06′ to 08.’ He held Vince Carter to 13-for-43 shooting in the first two games of the Nets Raptors 07′ First Round Matchup.

Unfortunately for Parker, a majority of his prime was spent overseas. His time spent in Toronto was at the tail end of his peak, but for the Raptors, he was a legit three-and-D player that would certainly be coveted by any team in today’s league.

Percentage-wise, he was one of the great but forgotten three-point snipers the league has seen. The biggest what-ifs for his game in the present era is how his shooting splits would be affected by an increased volume in attempts.

He averaged 1.5 and 2.9 three point attempts in his two seasons up north. Imagine if the Raptors just let him shoot threes alone instead of giving him shots inside the three point line.

Kapono also would’ve probably made a lot more money playing in today’s game, as three-point shooting is the most valuable asset any player can bring to a team.

Mo’ Pete is a fan favourite depending on who you ask, but it’s safe to say he was both one of the most polarizing players to ever put on the Raptors colours. He is best remembered for making one of the greatest shots in Raptor history, the famous “Hail Mary three by Mo’ Pete.”

Aside from that shot, he was a productive player for the Raptors in his seven seasons with the team. His career season saw him average 16.8 points while shooting an impressive 39.5 percent from deep on 5.5 attempts per game.

Those 5.5 attempts at the time for a player was a lot, considering teams as a whole only took approximately 16 threes a game according to shottracker.com

After he left Toronto, he was a franchise leader in multiple categories. In this era, Mo’ Pete’s best player comparison is a guy like J.R. Smith. Peterson had the ability to light it up on any given night, while also going cold for a certain string of games throughout the entirety of a season.

A player of his talents can be found today on most rosters that have any aspirations of competing.

Eyes on the Prize