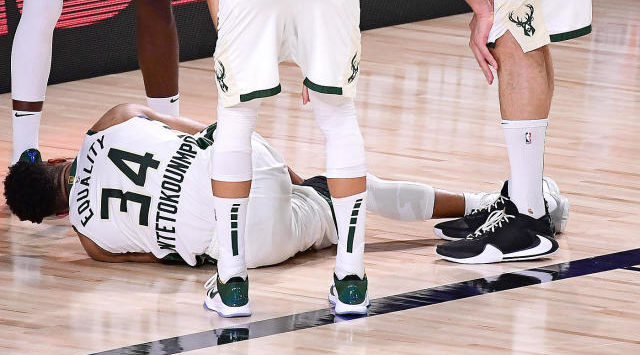 Somehow, behind the incredible play of Khris Middleton, the Milwaukee Bucks survived Game 4 to extend the series, but it came at a price.

Bucks’ superstar Giannis Antetokounmpo, who already was nursing an injury entering the game, appeared to have sprained and re-aggrevated his right ankle in the second quarter. Antetokounmpo would leave the game, not to return, and was seen boarding the team bus with a walking boot following the Bucks’ huge 118-115 victory.

“As far as for Game 5, they’re evaluating him now,” Bucks coach Mike Budenholzer said after the game. “He’ll get treatment through the night. We’ll just how he does over the next 24 to 48 hours.”

After leaving Game 4, Giannis Antetokounmpo was encouraging the Bucks to tape up his right ankle and let him return — but he couldn't plant or jump off the sprain, per sources. Around the Bucks, many didn't expect he could play today. No one dares rule him out yet for Game 5.

The MVP favourite was incredible prior to leaving the game, scoring 19 points on 8-of-10 shooting in just 11 minutes of play. Middleton’s 36 points was crucial to allow the Bucks to see another day.

“You feel for Giannis,” Budenholzer said. “I hope it’s not last what he did in the first 10 or 12 minutes. On an ankle that is not fully 100 percent, he was phenomenal to start the game. Gave us a huge boost.

Game 5 will go on Tuesday.