There’s a familiar narrative that comes around after almost every NBA Finals nowadays. Usually brought up by the team that lost in the finals, media members, or just bitter fans, the asterisk has taken a new meaning in the NBA.

Miami Heat President Pat Riley spoke with the media for the first time following his team’s defeat at the hands of the Los Angeles Lakers. Speaking on the defeat, Riley said “they beat us fair and squarely. But there will always be that asterisk; if we had Bam and Goran 100% – Goran was our leading scorer – it might have gone to a seventh game.”

This is a classic argument brought up after many NBA Finals, and frankly, it’s gotten old. The conversations on “what could’ve been” or “if only” can be held in almost any situation. For example; “If only I worked harder, I could have gotten a better grade,” or “if I paid more attention, things would be different.” Those statements aren’t much different from “if we weren’t hurt, we could’ve won it all.”

While Riley did clarify his statement, saying the asterisk should be applied to the Heat’s finals loss, The conversations about ifs and if onlys should be put to rest. At the end of the day, things played out the way they did, and there’s nothing that can be done about the outcome. 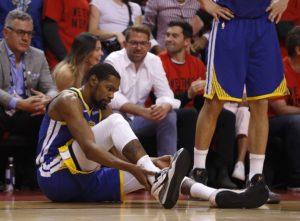 If anyone wants to put an asterisk on this past season, I’ll admit it’s somewhat fair. While the talk about ifs and what could have beens is ultimately useless, it is fair to say that in other circumstances, the outcome could have been different.

But if that’s the case, then a lot of other finals wins and championship teams should be held by the same asterisk-stamping standards.

Take for instance the 2018-19 champion Toronto Raptors. They had a historic playoff run, culminating in a win against the dynastic Golden State Warriors.

While the Raptors ultimately took home the NBA’s top prize, they did it against an injury-riddled Warriors team that hobbled their way into the finals. Kevin Durant was out for a majority of the series, and the one game he played in, he got injured after just 12 minutes of action.

Those 12 minutes were very impactful however, as Durant looked to be the determining factor to sway the series back in Golden State’s favour.

He had 11 points on three-for-five shooting, including three-for-three from downtown. The fact that the Warriors squeaked out a one point win in that game is only another indicator for Durant’s impact he had on the team.

The asterisk doesn’t end there however. Klay Thompson, who was on-fire for a majority of the series, also went down with injuries in the game six eliminator.

If Thompson didn’t get injured then maybe things are different in that game, and the potential game seven if the Warriors are able to force one.

A LOT of other finals can be argued the same way. If you ask Celtics fans, Kendrick Perkins’ injuries in the 2010 finals against the Lakers played a major role into deciding the outcome of that series.

Cleveland Cavaliers fans point out that if Kevin Love and Kyrie Irving didn’t suffer injuries in the playoffs, then the Cavs would’ve definitely won against the Warriors in 2015. Warrior fans would come back with the 2016 finals, where Draymond Green got suspended.

San Antonio Spurs fans will forever loathe Zaza Pachulia for his controversial shot contest on Kawhi Leonard, which effectively spelt the end of his stint with the Spurs.

This is why asterisks, when used to justify a loss in the NBA Finals, are silly. It’s always about what could’ve been, but the reality is what happened.

Injuries, while certainly unfortunate, are part of the game. Players get hurt, and it affects the outcome of a game, a series, or even the entire playoffs. But that’s the game.

COVID-19 brought an entire new element to the asterisk. Never before have we seen anything quite like this in the sporting world, let alone in the modern world in general. It’s still difficult to contextualized and grasp the fact that we are currently living in a global pandemic.

Because of the pandemic, no team had the luxury of having home court advantage in the playoffs. This is especially crucial for a sport like basketball, where players often feed off the energy a live, passionate, and rabid fan base. The energy they bring to a high-intensity playoff game is sometimes a swing factor in those close, nail biting games.

I think Toronto would of won this series easy with game 7 at home…Toronto fans usually spots you 5-10 points with their energy….💯💯💯

Basketball was played in a bubble, where players, league staff, their families, and media members were only allowed. While the league tried to make up for the loss of in-person fans with virtual fans and arena sounds, it still wasn’t quite the same as the real thing, on the teams’ actual home court.

This past championship, above all, can be argued to be the hardest NBA championship ever to win. Beyond the circumstances of injuries and coming off months of layoff due to the global pandemic, the civil unrest in America is a constant that both the league and players had to cope with, stand against, and take action against. 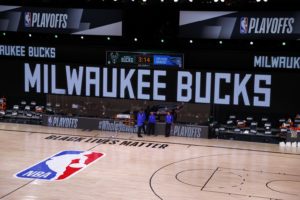 Despite the circumstances, a team rose up, all the way to the top, in dominant fashion. In a year, that has seemed more chaotic, hateful, and confusing as ever, the NBA was still able to crown a champion, despite the odds being against them.

The fact that the league was even able to maintain this bubble, with zero positive cases throughout the NBA restart, is an accomplishment in itself.

The two teams that stood at the end came into the bubble in late July, and left in mid-October. They would’ve spent just a little over three months away from their families. For a lot of players, that was the longest time they had ever spent away their families.

So when we remember the 2019-20 season, before we decide to put an asterisk on the outcome, remember that an asterisk can be put on almost any NBA Finals or playoffs, it just depends on how you look at it. We should also take a moment to consider that all the efforts it took to even make this season happen was a miracle to begin with.

If anything, the Lakers should get a golden asterisk, for rising above and beyond never-seen before circumstances an NBA champion has had to face, especially beyond the basketball court.