Avdija Ready for the NBA

Deni Avdija is ready to do whatever it takes to make his mark in the NBA. Avdija has quickly become the face of Israeli basketball, representing Israel on the world level at FIBA on both the Junior and Senior teams.

The 19-year-old forward played for Maccabi Tel-Aviv for the past three seasons, and he is a highly touted prospect in this year’s NBA Draft. He is projected to be drafted anywhere from the second pick, owned by the Golden State Warriors, to the fifth pick which is owned by the Cleveland Cavaliers.

It’s been reported that the Warriors are interested in drafting the Euroleague star, but Avdija isn’t concerned with where he lands. “It’s the NBA, and I’m excited for every team I’m going to talk to, it’s a dream come true and I’ll be down to play wherever,” said Avdija.

Right now, Avdija is intent on improving his game. “I’m just focusing on working for now and get preparing for the next level, the next step in my career.” 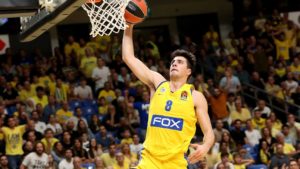 Avdija’s experience in the Euroleague is one of the aspects of his game that has received attention, considering the success Luka Doncic has achieved on both the European and NBA levels. Still, Avdija doesn’t want to be compared to the Slovenian, as he’s eager to make his own mark on the next level.

Avdija said he was glad to have the opportunity to play at the Euroleague level, and his experience playing with Maccabi Tel-Aviv has been a major advantage for him.

“It developed me very much. I played with grown men, some of them had a good NBA career, they played in a lot of places, experienced a lot of things.”

“As a young guy, there was a lot of pressure, but as the time progressed that pressure became a good thing. It helped me going through hard situations that I can meet in the future, and I think its a great great advantage and great thing to happen to me. I’m very glad I was in that situation in this specific team,” said Avdija.

A Student of the Game, and a Team-first Mentality

Playing for Maccabi Tel-Aviv has also allowed Avdija to play with former NBA players. A’mare Stoudemire and Omri Casspi were two guys Avdija continually asked questions to in regard to life in the NBA.

“Sometimes after games, they will say ‘oh Deni, that’s too many questions,’ but they really really really respect me and give me all the answers, all the time, and I’m very interested of what was there and I was very curious, so I asked a lot of questions.”

“For me to have those players who played a great career in the NBA, have my back and say the things they have gone through in the NBA helped me a lot to understand what’s going on and I think it was a big advantage for me, and it was a great time spent with them and the team,” said Avdija.

On the next level, Avdija is ready to contribute wherever his team needs him to. Avdija said if his team needs him to be a facilitator, he’ll be ready to play that role. “At the end of the day, you need to do your part as best as you can, and help the team win and be good on the court,” said Avdija.

“I’m gonna work as hard as I can, and I’m gonna do the best as I can for the team to be successful and win.”