The Los Angeles Lakers have done it. The Lake Show defeated the Miami Heat 106-93 in game six of the NBA Finals to win the franchises’ seventeenth NBA Title. The Lakers have now tied the Boston Celtics for most Championships in NBA history.

LeBron James captured his fourth NBA Championship, and also took home his fourth Finals MVP award. James netted a triple double, moving him closer to the most triple doubles in NBA Playoff history. He had 28 points, 10 assists, and 14 rebounds in the title clincher.

Rajon Rondo took a dip in the hot tub time machine and looked like his prime self. Rondo was on absolute fire from the field in game six, scoring 19 points on 8-for-11 shooting. Anthony Davis also chipped in with 19 points and 15 rebounds.

Danny Green bounced back after missing the potential game-winner in game five, going three for seven from deep. He scored eleven points to cap off his third title individually.

The Miami Heat were anything but hot from the field. They were particularly cold from the free-throw line, making just 13 out of 22 attempts from the charity strike. Bam Adebayo had 25 points, 10 rebounds, and five assists in the loss.

Jimmy Butler, who played 40+ minutes in every game of the series had 12 points, 7 assists, and 8 rebounds in the loss. Goran Dragic made his return to the floor in game six, coming off the bench for the Heat. He had five points and five rebounds in 18 minutes of action.

The Gamble Pays Off for LA 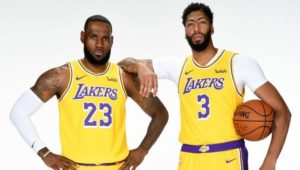 For the Lakers, the moves they made to acquire star forward Anthony Davis more than a year ago pays off. The Lakers were rewarded for those moves with the NBA’s ultimate prize. While Davis is set to enter free agency very shortly in the offseason, no one can take away the title they’ve won in 2019-2020. The Lakers and LeBron James have achieved what they have set out to do ever since James came to town.