Where do the Raptors go From Here: A Franchise at at a Crossroads

The Toronto Raptors are in one of the more unique positions within the NBA landscape. The Raptors are coming off a surprise season where the team was infamously projected to be an eighth seed in the Eastern Conference.

The team outperformed expectations, finishing with the second-best record in the East and ultimately bowed out to the Boston Celtics in seven games of their second-round matchup.

The team is currently still primed to be playoff contenders, with the likes of Pascal Siakam entering his new max deal and Kyle Lowry still being around for another year. Nick Nurse was also rightfully rewarded for his success as the team’s bench boss and got his contract extended.

The NBA is a star driven league, and usually the team that wins the title has the best player in the league on their team.

Siakam, for all his struggles in the postseason this year, he will surely come back stronger than ever, but there still are questions regarding his ability to perform as a number one option in the postseason.

Lowry, who will be 35 by the time next season is already underway, will still be one of the better point guards in the league.

His positional savvy, basketball IQ, and ability to lead a team are crucial for this Raptor team, but Toronto should not count on a 35-year-old Lowry to carry them to the championship.

Questions also come in with the contracts of key contributors such as Fred VanVleet, Serge Ibaka, and Marc Gasol.

Can the Raptors retain these three guys? Should they even retain all of them? And how do the Raptors pay them the salaries they deserve, while also maintaining cap flexibility for the 2021 free agency class?

So what gives? Where should the Raptors go from here? Well, there’s realistically three ways the team can go about business moving forward. 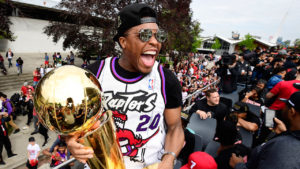 The talk of a rebuild has been widely discussed for many years now. To be frank, the original intention of former-Raptors GM turned President, Masai Ujiri was to completely overhaul the roster in 2013.

After James Dolan hesitated to accept a trade that would have shipped Lowry to New York, as well as a BUNCH of other moves by the front office, the Raptors became champions in 2019.

It seems like this era of Lowry-Ujiri basketball in Toronto could be coming to an end quite soon. Lowry, who is on the last year of his deal is still a hot commodity in the NBA due to his ability to impact winning.

A lot of teams around the league looking to compete for titles ASAP should be interested in a guy like Lowry, and with him not getting any younger, I imagine the Raptors will take a hard look at potentially moving the team’s most iconic player.

As painful as it might be for both Raptors fans, and management alike, the NBA at the end of the day is a business, and I expect the team to evaluate what sort of talent or assets they can recuperate for one-year of Lowry.

Even players like Norman Powell could potentially be on the move, as Powell is coming off a career year, and is still on a relatively friendly contract for the production he puts out on the floor.

Do the Raptors try to package Powell, who is likely in the prime of his career, along with other assets, in favour of a player that could potentially help push the Raptors over the hump? Maybe a player that’s younger and has potential to become that type of guy?

There’s also been a lot of talk about Masai Ujiri’s contract extension, and the potential of Ujiri leaving Toronto for destinations such as New York or Washington. In terms of Ujiri, from my view he can pursue whatever he wishes, and he will be successful at it.

Ujiri has also earned the highest possible salary out of any NBA executive in the league.

It’s no coincidence that the Raptors’ best years as a franchise have coincided with Ujiri’s tenure with the team. If MLSE truly values the Raptors franchise and its success over the last six years, they should give Ujiri any contract he wants.

Option 2: Swing for the Fences, again 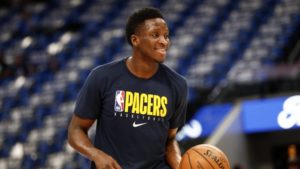 Remember when Masai Ujiri pushed all the chips to the middle of the table, and went all-or-nothing on a trade that was widely criticized by most, if not all, NBA fans, Raptor fans, and NBA analysts alike?

I surely do. Admittedly, I was one of them. Granted in the moment, you can’t help but be frustrated seeing the franchise’s most beloved player get traded for a potential one-year rental.

It ended up being a one-year rental. But it sure as hell went down as the best one-year rental of all-time. The Raptors can make somewhat similar moves this offseason.

Victor Oladipo is a player that the Raptors could potentially make a move for, as the former All-Star has become disgruntled with the Indiana Pacers organization, and could potentially look to force his way out.

Sounds familiar right? While Oladipo isn’t quite on the same level as Kawhi Leonard, he is undoubtedly the type of player the Raptors are looking for, (when healthy of course).

It wasn’t long ago when Victor Oladipo was the leading scorer on a Pacers squad that took LeBron James’ Cavaliers to seven games in the first round. If Oladipo can return to that level of play, this could be a potential steal for the Raptors.

The best part is Oladipo’s contract will expire before the free agency frenzy of 2021.

The Raptors, should they acquire Oladipo, can still compete, while also maintain their financial flexibility for the ultimate goal of landing a marquee free agent. As Hannah Montana would put it, “you get the best of both worlds.”

Option 3: Stay the Course; Hope for Internal Development and Put ALL the Eggs in the 2021 Free Agency Basket 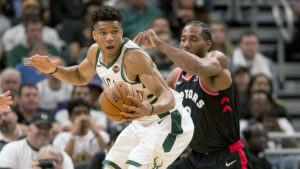 This approach is by far the safest, and the one the Raptors have taken for many years prior to the Leonard trade. The Raptors have been one of the better teams at both evaluating talent in the draft, and developing that talent into key contributors for their team.

As long as the likes of Ujiri, Bobby Webster, Dan Tolzman, and Nick Nurse are around, they will surely find talent in the NBA draft to groom into rotation players.

There’s hope that Pascal Siakam takes his postseason struggles as nothing more than a speed bump in his development, and comes back next season better than ever.

If the Raptors choose to retain Fred VanVleet, and one of Serge Ibaka or Marc Gasol, the hope is that they’re able to on team-friendly deals, but the reality is the Raptors will likely have to pay at market value or greater to retain these guys (probably not Gasol however).

It’s been an open secret around the NBA that the Raptors are contenders to land Giannis Antetokounmpo in 2021, and the moves Ujiri and his staff have made the last couple years had 2021 free agency in mind.

Kawhi Leonard could also test free agency, should he decline his player option for the 2021-22 season.

Should the Raptors take this approach, the likely scenario is that they retain one of VanVleet or Ibaka, letting the other along with Gasol walk, and find some budget options to fill out their roster for next season.

Exciting Times Ahead Regardless of Which Direction the Team Goes

Being at a crossroads is by no means a bad thing in the NBA. It’s a privilege to have a multitude of options moving forward, and the excellence of the Raptors front office has allowed the team to have such flexibility.