Theo Maledon Ready to Follow his Own Path to the NBA

It was only a year ago when Theo Maledon was considered a top talent in the 2020 NBA Draft Class, being projected as a potential top-ten draft pick. Almost a year later, Maledon’s draft stock has fallen. He is currently projected to land anywhere between the mid-to-late first round.

Maledon said the fall in draft stock has certainly been on his mind, but he knows the only place he can prove his doubters wrong is on the court. “It’s not helpful to talk about stuff like that, it’s only the court that you can prove things and that’s what I’m looking forward to,” said Maledon.

The 19-year-old French Point Guard is the protégé of San Antonio Spurs legend Tony Parker, and Maledon spent the last season playing for Parker’s team ASVEL. Maledon said playing the in Euroleague has helped him develop professionalism, and he said that experience will help his transition as a professional to the NBA. 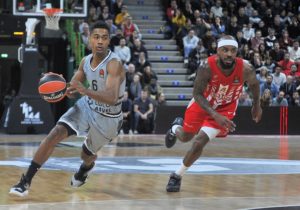 The stigma surrounding European players has certainly shifted after the meteoric rise Luka Doncic has had in the NBA, and many scouts are intently looking at European prospects as potential difference makers in the NBA. While Maledon recognizes what Doncic has done for European players, he said he believes he must follow his own path rather than follow in the footsteps of the Slovenian.

“I think, for myself, I gotta create my own path. I’m not gonna follow anyone’s path but mine, so that’s something I’m focused on,” said Maledon. “I’m me at the end of the day, and I gotta do me.”

Areas of Strength and Weakness

Maledon said his most NBA-ready aspects of his game are his pick and roll play, as well as his professionalism. Maledon said he often watches film of other NBA Point Guards. The players he watches is dependent on what they are good at.

Maledon said he observes Chris Paul, particularly in pick and roll, as well as Russell Westbrook’s transition game and how he operates on the fast break.

Maledon also recognizes that he still has a long way to go in order to reach his goals, as he said he feels all aspects of his game are still subject to improve.

“I think I still need to improve in everything for sure. The NBA is another gap where you got better athletes and great players. I feel like I want to improve every part of my game.”

Maledon has also benefitted from playing with former and current NBA players such as Rudy Gobert and Nicholas Batum on the French National Team. Also under the mentorship of Tony Parker, Maledon said the best advice he’s gotten from his fellow countrymen has been to enjoy the process.

“The most important thing that I took was probably to enjoy the process, always be at 100% but don’t forget that you got to enjoy it, and be happy at where you at, but at the same time to want more.”

Eyes on the Next Season 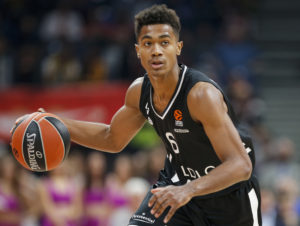 Maledon said he hopes to land in a situation where the team shows genuine interest in him as a player, and ultimately has a plan with him on the roster. He said realizes he will have to prove himself from day one, wherever he lands.

“I feel I’ll have to prove myself from day one, that I get drafted by any team that drafts me. I think it will be a constant effort to prove and trying to gain a spot. From now, grind, keep grinding and climbing to get where I want to be,” said Maledon.

Regardless of where he ends up, Maledon is ready to work. He is ready to prove he deserves a spot in the NBA.