The 2020 NBA Draft came and went, largely without any major moves throughout the league. The expected trio of Anthony Edwards, James Wiseman, and LaMelo Ball were selected with the first three picks, and save for Patrick Williams being drafted at number four and Jalen Smith going in the lottery, there weren’t many surprises in the lottery.

There’s no team that did quite as good on draft night than the Philadelphia 76ers. The day started off with a bang for Daryl Morey and the front office, shipping off Al Horford, a protected 2025 first round pick, along with the draft pick that became Theo Maledon to the Oklahoma City Thunder in exchange for Danny Green and Terrance Ferguson.

The Sixers are trading Al Horford and a first-round and second-round pick to the Thunder for Danny Green, sources tell ESPN.

The trade is proposed until the Denis Schroder trade is approved by the league, as Danny Green is part of that deal as well.

Immediately, you can see the approach Morey is taking to re-tool around Joel Embiid and Ben Simmons. Morey put an emphasis on adding shooters around his two stars, and they went out and got some shooters.

The trade opened up the floor for both Embiid and Simmons to operate in the paint. The move also positions Philadelphia well for the future, moving off of Al Horford’s contract moving forward.

Morey and company weren’t done for the night. They also added sharpshooter Seth Curry to the roster, trading away Josh Richardson and the 36th pick which became Tyler Bey. The 76ers drafted the explosive Kentucky guard Tyrese Maxey with the 21st pick, added sharpshooter Isiah Joe with the 49th pick, and rounded out their night selecting Paul Reed 58th overall.

Maxey and Joe are great selections at the picks the 76ers got them at. Maxey projects to be a decent shot-creator and playmaker at the next level in day one, and should help out the Sixers who lacked shot creation and playmaking outside of Simmons and Embiid. 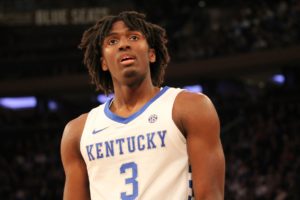 Isiah Joe is one of the draft’s best shooters, not necessarily percentage-wise, but was forced to take a lot of tough shots for Arkansas last season. He has deep range from three, and his percentages should improve in an NBA offence where he won’t be one of the primary scoring options right away.

Adding Danny Green and Seth Curry to the roster gives the Sixers some much needed spacing on the wings, and with Curry, they get a dynamic shooter they haven’t had since J.J. Redick’s departure. A great overall showing for the Sixers, who look to be trending back in the right direction.

The 2020 draft was one of the more interesting drafts to follow as there were some pretty good players to be selected in the middle of the draft still.

Miami gets an absolute stud of a player in Precious Achiuwa. He’s a hyper-versatile forward-centre who’s size, athleticism, motor, and work ethic should fit in perfectly with the established culture of the Miami Heat. Just looking at the Heat’s recent draft history, along with the development of Bam Adebayo over the past couple years is enough to be excited about Achiuwa’s future with the Heat. 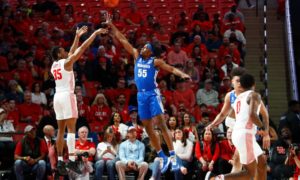 The Raptors picked a player at #29 who they valued much higher than other front offices around the league. Toronto’s getting a pick and roll specialist in Malachi Flynn, who’s defensive ability and toughness absolutely fit the bill in terms of what the Raptors usually look for in a draft prospect.

The Raptors could potentially be thin at the guard spot fairly soon, and Flynn is a great add to a team looking to stay competitive in the Eastern Conference landscape.

Washington also gets a player they weren’t expecting to select with the ninth pick. Deni Avdija looked to be a lock in the top five heading into draft night, and he slid down all the way to Washington instead. The concerns about Avdija’s shot-making ability, particularly from three, likely contributed to his slide, but he’s NBA-ready in just about every other part of his game.

Avdija brings excellent playmaking skills, solid team-defence, and a team-first mentality to a Wizards team that could use all the help they can get with John Wall’s return imminent.

There weren’t any standout losers from draft night this year, but if any really stood out among the pack, the teams that probably came out of the draft as losers would be the Celtics and Warriors.

For the Celtics, the goal was to potentially package their three first round selections to either move up in the draft, or to bring in an established player to help their win-now cause. Instead, there were no takers on their draft picks, and they ended up making selections at each of their picks. 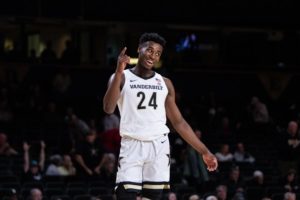 They still made solid selections in Aaron Nesmith, who projects to be a knockdown shooter and potential three-and-D guy at the next level, and Payton Pritchard, who should provide some insurance at the backup point if Brad Wanamaker leaves town. They also selected Desmond Bane, who they traded to the Memphis Grizzlies.

A mediocre showing for the Celtics, who in an ideal world, could’ve added an athletic centre along the lines of an Onyeka Okongwu to help support their interior defence.

Golden State comes out of the draft as a loser for the same reasons Boston had. The Warriors were going to make a selection if it came down to it, but ideally they would’ve liked to package their second overall selection and a player like Andrew Wiggins in an attempt to land a star player to help their chances to compete next season.

Instead, the bad news came right before the draft. Klay Thompson suffered a leg injury while working out earlier on draft day. It turns out that the Warriors fears materialized, with Thompson’s injury diagnosed as a season-ending achilles tear. The Warriors ended up picking Wiseman, who’s a great player, but if you are the Warriors, the last 24 hours haven’t played out exactly as planned.