Alex Trebek and His Connection to the Game of Basketball

Alex Trebek, longtime host of quiz-game show Jeopardy! passed away after battling pancreatic cancer. He was 80 years old. Trebek leaves behind his wife, Jean Currivan, and his two children, Matthew and Emily.

Jeopardy! is saddened to share that Alex Trebek passed away peacefully at home early this morning, surrounded by family and friends. Thank you, Alex. pic.twitter.com/Yk2a90CHIM 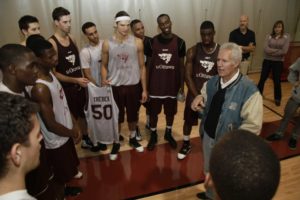 Trebek grew up in Sudbury, Ontario, and got into the sport in, as he called it “an unusual way.” When he was in high school, despite never playing basketball in his life to that point, Trebek tried out for the basketball team.

“I figured they’re gonna cut me after the first few practices, but they didn’t. And after three or four weeks of practices when they selected the team, I was on it, as point guard.”

Trebek moved to the US in 1973 and from there became a Lakers fan. His Mount Rushmore of Laker players is Kareem Abdul-Jabbar, Magic Johnson, Shaquille O’Neal, and Kobe Bryant.

He was often spotted courtside on Christmas Day games, cheering on the Lakers. 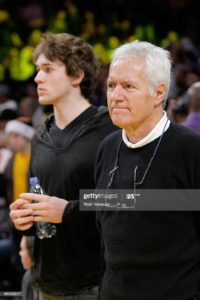 Trebek also made an appearance in the classic 1992 basketball movie White Men Can’t Jump, where Trebek appeared in the movie as himself.