The Culmination of a Dream: NBA Draft Day Fashion

For anyone that’s dreamt of playing basketball at the highest level, draft night is the night you’ve dreamed of since the moment you started hooping. It’s a night filled with excitement, anxiety, joy, and sorrow. A true whirlwind of emotions. Draft night is the opportunity to introduce yourself to the league, and nothing says more about a person than the way they dress!

Draft day fashion is so important, as all the photos and videos taken that night will forever be linked to the moment an NBA career began. As a player, you want to take the right first step onto the NBA stage. That often leads to many bold fashion choices.

Here are the most memorable looks from draft night throughout the years. Some memorable for the right reasons, some we’ll never forget for the epic fashion faux pas. 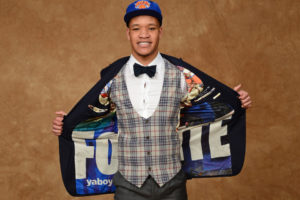 BROOKLYN, NY – JUNE 21: Kevin Knox poses for a portrait after being drafted by the New York Knicks during the 2018 NBA Draft on June 21, 2018 at Barclays Center in Brooklyn, New York / Jennifer Pottheiser / NBAE via Getty Images

It doesn’t matter what you do as a prospect, if you’re drafted by the New York Knicks, expect to be booed. Still, Kevin Knox made a decent effort in putting together a fairly respectable outfit ensemble for draft night.

Nothing is particularly egregious about his suit on surface value. The waistcoat has a nice checkered pattern, and the navy accents match his bow tie.

What throws this look off, just a bit, is what’s inside the suit jacket. A graphic showcasing the popular video game Fortnite.

Usually, the inside of an NBA draftee’s suit jacket is reserved for a special message or pays tribute to their college or hometown. In this case, Knox chose to pay homage to the most popular video game of the time, only giving Knicks fans more reason to groan at their draft selection that year. 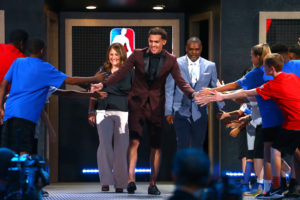 NEW YORK, NY – JUNE 21: Trae Young is introduced before the 2018 NBA Draft at the Barclays Center on June 21, 2018 in the Brooklyn borough of New York City / Mike Stobe / Getty Images

Fashion is often about taking risks to ultimately set new trends in motion. In the case of Trae Young, he became the first NBA draftee to rock shorts with his suit ensemble on draft night.

The suit itself is a clean bordeaux red featuring black accents. The standout pieces of the suits is of course, the shorts. As jarring and irregular shorts appear to look with a suit, this look isn’t that bad.

You can appreciate the fact that Young decided to make such a bold fashion choice, on a night that will be forever linked to his career, and for that he should be applauded.

Young delivered on one of the more memorable looks from draft day in recent memory. 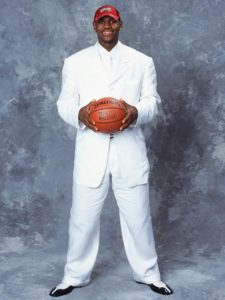 It takes a truly confident young man to pull off the all-white suit, and LeBron does so easily.

The only thing that makes this suit somewhat unfashionable is the cuts of his clothing being way too oversized. I get it, we should give LeBron a pass considering nearly every player drafted in 2003 had a baggy, oversized suit, but unfortunately it doesn’t warrant a pass in 2020. 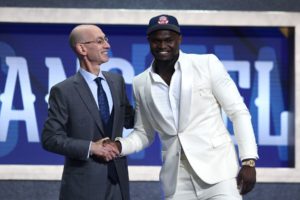 It’s obvious what Zion Williamson tried to do in the 2019 draft. Being the most hyped prospect since LeBron James, it’s only fitting the comparisons continue with their draft day fashion.

Zion pulled off a more modern version of LeBron’s draft day suit from 2003. Zion sports a predominantly off-white coloured suit, with a ribbed pure-white shirt. The most important part of the suit, is that unlike LeBron’s, it actually fits properly!

The tailoring of this suit alone gives it a more flattering look compared to LeBron’s, where he’s swimming in his trousers. Leaving the shirt unbuttoned at the top was also a nice touch, giving the whole look a more laid-back vibe.