The Bet Pays Off

Fred VanVleet made headlines after a podcast appearance where he spoke on his pending free agency.

VanVleet said “I’m trying to get paid, man. I’m not shy about that. I don’t have to tell people that I value winning. Just look at my story, do your research. I’ve never been on a losing team in my entire life. That’s what I’m about and that’s just what it is. I won a championship and now it’s time to cash out.”

VanVleet spoke on how he’s ready to take on “a lead role” in whichever franchise he chooses to sign with, being 26 years old and still having room to improve his game even further.

This shouldn’t be news to anyone that’s followed VanVleet’s career extensively. Being undrafted in the 2016 draft class, he eventually ended up with the Toronto Raptors. VanVleet worked his way up from G-League champion, to bench mob staple, to eventually a key contributor on an NBA championship team and as a starter in the league.

He’s bet on himself every step of the way, and you can bet he will continue to do so throughout his NBA career.

Now he enters the 2020 free agency class as a highly coveted player with a lot of teams that are looking to add a steady player of VanVleet’s calibre. With free agency set to begin Nov. 20th at 6pm EST (signings will be made official on the 22nd at noon EST), here are the potential landing spots for Fred VanVleet. 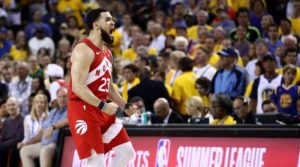 The Raptors are prepared to pay VanVleet, and Raptors President Masai Ujiri has made it clear that retaining Fred is “a big-time priority” for the team.

The question is rather how much is the magic number for the Raptors, and for VanVleet. The interest is certainly there for both sides, but ultimately the Raptors are heading into this offseason with the goal of preserving as much cap space possible for a 2021 free agency class that will feature the likes of Giannis Antetokounmpo and potentially Kawhi Leonard (player option).

Idealistically, the Raptors would love to sign VanVleet on a four-year, $80 million deal. It’s a fair price for the role VanVleet provides the team, and a player option in the fourth year would make a lot of sense for VanVleet’s flexibility should he want to re-opt into a bigger deal once Lowry is gone.

VanVleet is also the perfect successor to Kyle Lowry, who continues to defy father time at age 34. The question is, how much longer will Lowry be able to sustain his play at an elite level? VanVleet, who has both studied under Lowry’s tutelage, and starred alongside him over the years, is the ideal candidate to take the reins once Lowry decides to hang em’ up (or if he’s traded).

The likely scenario is that the Raptors will have to pay more than $20 million a year, given that he can definitely get offered bigger numbers elsewhere. 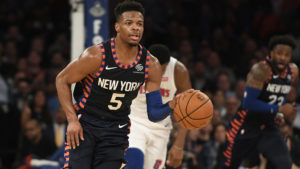 New York is in desperate need of a point guard. Dennis Smith JR. and Frank Ntilikina haven’t quite panned out as the Knicks originally thought, and VanVleet serves as a needed upgrade at the lead guard position.

He would fit in well alongside R.J. Barrett and their young squad of talent, and his ability to defend will make him a rotational staple in Tom Thibodeau’s defensive schemes and system.

The big question is if New York will take a big swing on VanVleet. They are certainly capable of offering VanVleet a contract in the range of $25-30 million a year, which is what ESPN Front Office Insider Bobby Marks projects VanVleet can command on the open market.

A deciding factor in New York potentially offering VanVleet this contract is the situation of other star guards (Chris Paul and Jrue Holiday) that are currently on the trading block.

If the Knicks are targeting Paul, Holiday, and VanVleet, what order are the Knicks prioritizing each of them? If the Knicks make a move for either Paul or Holiday, it’s likely VanVleet to the N.Y. is off the table. It’s also likely if the Knicks don’t acquire either of Holiday or Paul, they’ll go all in on VanVleet. 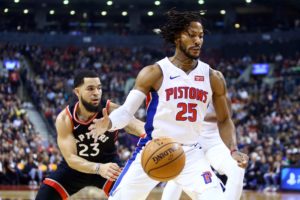 Detroit is a team that would also love to acquire a player like VanVleet, as their point guard rotation is thin with Derrick Rose and Bruce Brown being the only point guards getting meaningful rotation minutes.

Adding VanVleet could potentially open up the teams offence, getting Derrick Rose to operate a little bit off the ball, and hopefully unlocking a deadly pick and roll partner in a healthy Blake Griffin. VanVleet also has a connection with current head coach Dwayne Casey due to their times spent in Toronto.

Detroit is a good fit basketball wise, and they also have the cap space to go out an acquire a guy like VanVleet who has a wide market of suitors. The biggest question for the Pistons is what will they do about Christian Wood.

Wood was a bright spot for the Pistons last year after trading away Andre Drummond. Wood shined in the starting centre position. His averages of 22.3 points, 9.5 rebounds, 1.9 assists and a block on 56% field goal, and 41% from three were impressive. If Wood’s market of suitors is larger than expected, the unrestricted free agent may opt to play elsewhere next season.

If the Pistons prioritize both retaining Wood and signing VanVleet, the Pistons may have to either focus on signing one or the other, or they may take the risk of offering less money to both in an attempt to sign both onto the roster for next season. 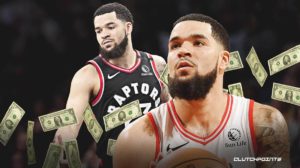 If I had to put money on where VanVleet signs this offseason, I’d have to say New York is a strong strong possibility. The Knicks seem like the type of team that would max out Fred VanVleet.

There’s no doubt VanVleet is an exceptional player, and the Knicks are probably the only team that I can envision giving VanVleet that type of contract. And if in VanVleet’s shoes, why wouldn’t you take $25-30 million a year to play in the Big Apple if it was on the table?