Prospects to Keep an Eye on at NBA’s Draft Night

The 2020 draft class is widely considered to be one of the weaker draft classes in recent memory. There isn’t a standout, sure-fire superstar anywhere across the draft board, but there are many players that could potentially come out of nowhere to become the best among fellow draftees.

A couple years down the line, this 2020 class may be remembered as a draft deeper than what was presented at surface value.

I evaluate draft prospects on a couple different criterias. Firstly, I automatically look for a prospect who’s a no-brainer to select, a can’t miss prospect, if you will. I evaluate this type of prospect based on how their skill set fits into the modern NBA, along with how much they need to improve in their game in order for them to become a star.

Next, I look at potential. Who has the highest ceiling in the draft, with the potential to develop into a transcendent star? This type of player is not always a highly touted prospect, but under the right environment, could blossom into something special. Think the Giannis or Jokic, or Bruno Caboclo of a draft.

Here are my top prospects based on those categories. 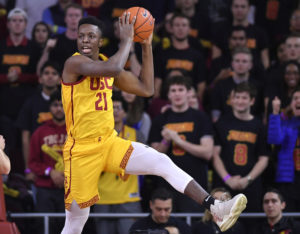 It’s hard to name a player in this class that can be considered a no-brainer selection. There aren’t any players on the level of a Luka Doncic, Ben Simmons, or Zion Williamson in this draft, but there is one prospect who I believe is as close to a sure thing as possible.

Onyeka Okongwu is a 6’9 forward/centre from USC, and his skillset he brings to the NBA is what, in my eyes, separates him from the pack.

It’s hard to come across a player with Okongwu’s size that can impact the game the way he can. He’s shown the ability to be extremely versatile on the defensive end, showing an innate ability to both defend the rim (he averaged 2.7 blocks a game last year) and defend along the perimeter.

Combine his defence with one of the best motors in the draft, he becomes a true defensive terror. Okongwu is not afraid of making multiple efforts to secure a rebound. The skill set Okgonwu brings to an NBA team is rare, even for today’s league.

It’s certainly tough to find many NBA bigs that can bring the same skills Okongwu does to the hardwood. Okongwu out of college has a similar game to Bam Adebayo’s before Adebayo developed his passing and shooting.

Even if Okongwu doesn’t develop a serviceable jumper or he doesn’t become a playmaker on the level of Adebayo, he will still be a valuable contributor to any team that drafts him.

His game suits winning, and ultimately impacts winning more so than any other prospect in this class. He’s a no brainer, especially if you’re Golden State and keeping the draft pick. 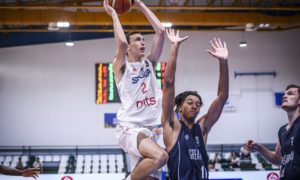 This is always the fun part of evaluating prospects. There are some selections that just scream “draft me,” but then there are the question marks, the hypotheticals, the picks that make you and your team nervous and anxious as hell.

In this draft class, an obvious boom or bust pick is LaMelo Ball, but you likely know everything there’s to know about the youngest Ball brother by now. He’s definitely high risk, high reward, but Aleksej Pokusevski is even more of a boom/bust selection.

Imagine a seven-foot hybrid of Kristaps Porzingis, Nikola Jokic, with a little mix of Luka Doncic, in the frame of Bol Bol. That’s what you hypothetically get in Pokusevski.

The Serbian is the youngest player in the draft, and he spent time last year playing for the Olympiacos’s B-team in Greece.

He’s got excellent vision for his size, and he’s able to use his height to make terrific passes that most players his size couldn’t make otherwise. He’s also comfortable making passes off of a live dribble, while also possessing a decent handle.

Pokusevski is also comfortable shooting off his dribble, and his potential to develop a pull-up game along the perimeter surely has teams salivating.

He’s also shown the ability to run in transition, as a ball handler. He’s not the quickest player up the court, but shows the awareness to make plays for his teammates, and for himself while moving in the fastbreak.

On the defensive end, he’s a plus shot blocker, utilizing his seven-foot-three wingspan to swat away opponents at the rim.

For Pokusevski to become an elite talent at the NBA level, the team that drafts him will likely have to bring him along slowly. He’s not an overall plus at the defensive end, and it’s likely he’ll never become a lockdown defender on the perimeter, but he’s already shown signs as a decent team defender, and can only improve from here on out.

He’ll also have to add on a lot of strength and weight to his frame, as he will be attacked both in the post, on the block, and on drives by better, faster, and stronger athletes in the NBA. The future is bright for Pokusevski, under the right development and guidance. He could be this year’s Giannis, but he could also be this year’s Dragan Bender, and there’s likely no in-between. 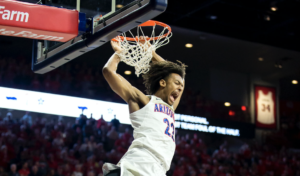 This is a perfect draft class to have late draft pick selections. In terms of the talent as a whole, there isn’t much of a visible drop off from prospects in the top ten to the late first round.

There is immense value for teams selecting late, and a player teams should, and most likely are looking at is Arizona centre Zeke Nnaji.

Nnaji is a 6’11 forward with the best motor in the draft (yes, better than Okongwu). He’s shown an innate ability to hunt the rebound down throughout his lone season with the Wildcats.

He’s hyper-athletic, and uses his athleticism to finish effectively at the rim. Nnaji’s comfortable operating in the pick and roll, and has also shown the ability to hit jump shots out of the pick and pop from mid-range.

Nnaji’s already an NBA-ready rotation player, and his jumpshot’s development, along with his ability to defend on the perimeter are the skills that will determine his role in the NBA a couple years down the line.