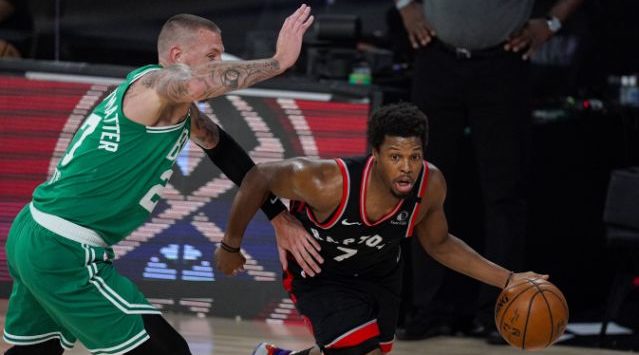 According to The Athletic’s Blake Murphy, Kyle Lowry did not travel with the Toronto Raptors for their two upcoming preseason games.

Kyle Lowry is not with the Raptors in Charlotte for these two preseason games. He was "granted permission" to stay behind.

The 34-year-old point guard is coming off a short offseason due to the NBA season being postponed, then extended due to the COVID-19 pandemic.

Murphy states that the Raptors will not comment on whether Lowry is missing the road trip due to COVID-19 related reasons.

It was reported earlier this week that three members of the Toronto Raptors organization tested positive for COVID-19, and the league has reported 48 positive cases among NBA players.

The active cases among NBA players make up nine percent of the player base, and Shams Charania of The Athletic reported that the league is planning on implementing rapid testing.

Sources: Policy for invalid coronavirus test results: Undergo another rapid test at least 30 minutes after result of the first test — and still able to participate in team activities while awaiting second result. https://t.co/ho9XUufQDJ

With Lowry out, the Raptors will likely look at some of the new additions to fill in. This will serve as a good opportunity for players potentially crack the regular season rotation. Expect to see names such as Malachi Flynn and Paul Watson Jr. get some looks in this two-game series against the Charlotte Hornets.