How Does the Giannis Signing Change Everything for the Raptors

Giannis Antetokounmpo shocked the basketball world after re-signing with the Milwaukee Bucks on a five-year, supermax extension.

There were certainly doubts that the superstar forward would resign in Milwaukee, and up until the signing of the deal, there was an expectation around the league that Giannis would wait until the conclusion of the upcoming season to decide on whether to sign the extension.

As @Giannis_An34 tweeted, he is signing his extension with the Bucks. His agent, Alex Saratsis, tells ESPN it will be for the full five-year, $228M super max, including an opt-out after the fourth year.

Nonetheless, Giannis secures the financial stability and re-ups for another four to five years with the team that drafted him, and the Raptors are left with fewer targets in the upcoming 2021 free agency class.

This signing hurts, particularly if you’re a Raptors fan. It was no secret that the Raptors were targeting Giannis in free agency, and it was just recently revealed that Masai Ujiri had tried to acquire the Greek Freak as early as 2013 on draft night.

Giannis, Paul George, and LeBron James all signed extensions prior to the start of the 2020-21 season, and suddenly the 2021 free agency class has taken a hit in terms of top-level talent being available.

With that being said, there are still options the Raptors can take moving to acquire top talent and remain competitive in the league. Here are the potential moves Raptors can make now that Giannis is off the board for next year’s free agency class. 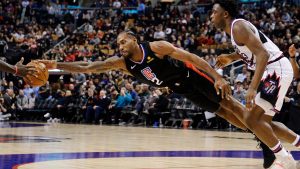 While Giannis was the ideal acquisition, there are still many marquee free agents available at the time this is being written. Kawhi Leonard is the obvious fallback option given his success in Toronto and lack of success (so far) in LA. If Leonard and the Clippers flame out of the playoffs once again, a reunion in Toronto could make a lot of sense for both sides.

It’s worth noting that Leonard has a player option for his deal heading into 2021-22, which he can choose to opt-in to or not at the conclusion of this upcoming season, or he can also opt to sign an extension with the Clippers similar to what Paul George opted for. 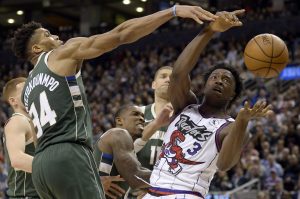 The Raptors can be a little more eager to spend some of the money they were saving, and a move that’s likely to take place is the extension of OG Anunoby’s contract. The four-year forward is one of the Raptors most valuable players as he’s developed into one of the best three-and-d players in the league.

Anunoby’s defensive versatility, three-point shooting, and age make him both a valuable asset on and off the court. He’s already a player many teams around the league would love to acquire, and if Anunoby shows an improved ability to create his own shot this season, his value and the Raptors options will surely increase.

#3. Package a Deal for a Superstar 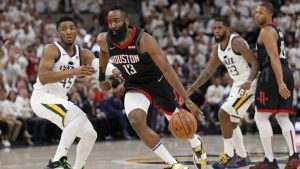 Toronto can still potentially put together a trade package that can land a superstar talent in town. The roster currently houses a lot of young talent, veterans on expiring deals, and the Raptors have draft picks moving forward.

We’ve already explored the merits of a James Harden deal to Toronto, and it’s not farfetched to believe other superstar players around the league could become fed up with their current situation throughout the season moving forward. Even Giannis Antetokounmpo could force his way out of Milwaukee in the future if he becomes fed up with the organization.

Giannis Antetokounmpo has a 15 percent trade kicker on his five-year, $228.2M supermax extension with the Bucks, sources tell @TheAthleticNBA @Stadium.

It certainly makes sense now more than ever to acquire a James Harden-type superstar via trade if the opportunity presents itself.

#4. Retain the Front Office At All Costs 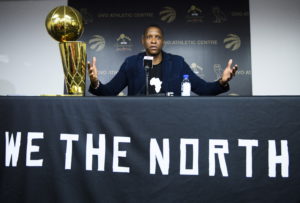 Masai Ujiri, Bobby Webster, Dan Tolzman, and the rest of the Raptors’ front office are the core of the organization and are arguably some of the most important members of the team. It was Dan Tolzman who scouted Fred VanVleet. Masai and Bobby orchestrated most of the moves to acquire key players over the years that ultimately led to the Raptors’ first championship.

As long as the Raptors can retain this core part of the front office team, fans and ownership can rest assured that the Raptors will remain competitive while also having the ability to identify talent in the draft year after year.

I agree. I don't think Kawhi is coming to T.O. I think Rudy Gobert and keeping OG is way to go and may be sign and trade norman Powell. To get a pick and a big. Nice read John