Year in Review; Remembering the Top Raptors Moments of 2020

Despite the Raptors recent struggles, along with the overall year that was 2020, there were many moments to remember and celebrate throughout the year for Raptors fans, and for the organization as a whole.

Honourable mentions go out to the banner ceremony commemorating the 2018-19 championship season, along with the Raptors’ insane comeback against the Dallas Mavericks which happened late 2019.

Here are the top moments to remember from the Toronto Raptors in 2020. 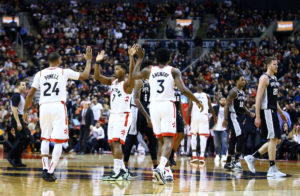 Admittedly there aren’t many moments to remember in the 2020 year for the Raptors that didn’t occur in Orlando. There was however one caveat that happened before the sports world was rocked by COVID-19. From January 15th to February 16th, the Raptors went on a tear to the tune of 15 straight victories.

Most of the victories came against sub .500 teams, but many have forgotten that the Raptors dealt with a myriad of injuries during the 2019-20 season, and this stretch of victories was no exception, making this feat even more impressive when this fact is taken into account.

Marc Gasol, Serge Ibaka, and Norman Powell all missed games during this win streak, leaving players like Patrick McCaw, Rondae Hollis-Jefferson, Chris Boucher, and Terrence Davis II to step up in the rotation.

This streak also marked the longest winning streak in Canadian sports history by a major sports team, beating out the Calgary Stampeders record of 14 straight wins in 2016.

The Toronto Raptors made waves across the league with their arrival to the Orlando NBA Bubble. The Raptors arrived to Orlando after training in Naples, Florida, in two buses with the statement “Black Lives Matter” printed on the buses.

The Raptors’ stand with the Black Lives Matter movement helped create more discussions among players, executives, and franchises on what more can be done to support and educate about the injustice and civil unrest in the US.

Sweeping the Nets in Round 1 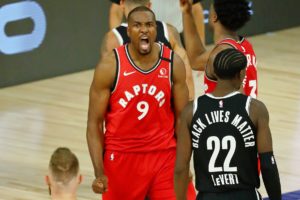 The Raptors got their first ever sweep in franchise history during the 2020 playoffs. Matching up against the rival Brooklyn Nets, Toronto got the job done in rather dominant yashion, winning every game fairly comfortably aside from a nail biter in game two.

For a franchise that has had many playoff appearances over the past decade, along with an NBA championship, it was almost unbelievable that the Raptors had never swept a playoff opponent up until this point. Nonetheless, the Raptors checked that achievement off of the bucket list in 2020.

Forcing Game 7 on the back of Kyle Lowry 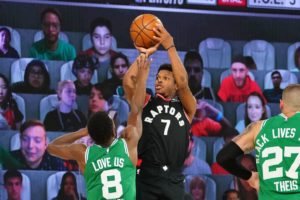 The Raptors-Celtics 2020 second round playoff series was a neck and neck affair, with the series coming down to the wire in the last three games. Kyle Lowry, the franchise’s most beloved and celebrated player showed us yet again why he is considered, by most, if not all accounts, as the greatest Raptor to ever play for the organization.

After going down two games, and nearly falling into a three-to-nothing deficit, the Raptors came roaring back, once again allowing us to believe that miracles are possible. The Raptors and Lowry let us believe, one more time, that the team could get it done.

In game six, the Raptors and Celtics are engaged in a back-and-forth battle of wits and wills. The game reaches overtime. By this point Lowry has been on fire all game long, connecting a healthy mix of mid-range jumpers, long range heaves, and at-the-rim attacks. The game reached a fever pitch going into double OT.

The Celtics and Raptors both only managed eight points in the first OT period. With 3:35 left in the second OT, Lowry makes a drive to the basket and finishes over the outstretched arms of Kemba Walker and Jaylen Brown.

Raptors down two. One minute left to play, Lowry draws to defenders, and finds OG Anunoby for a wide-open three at the top of the key, nothing but net. Raptors up 118-117.

Now the Raptors are up by two with 17 seconds between their season ending and a seventh, final game to decide who will advance to the Eastern Conference Finals. Lowry is guarded in single coverage by Walker, who Lowry has gotten the better of on multiple occasions throughout the series.

Kyle goes to a spin to his right, drives to the basket, and begins his post-up near the painted area. Lowry fades away at the right elbow of the court, off-balance, and hits the shot to put the Raptors up by two possessions, and for good.

This game, by-far was one of the craziest games to watch live on TV in Raptor history, and that includes all the insane games played in the 2019 playoffs. A top five Raptor game of all-time, with the greatest Raptor of All-Time having one of his greatest games ever in a Raptor uniform. Truly poetic.

OG Anunoby lifts the Raptors with a Series-Altering Game-Winner

In what was the moment of the season, and the shot of the season for the Raptors, it couldn’t have come at a better time. The Raptors were coming off of a blowout loss in game one and a close game two loss against the Celtics. The Raptor offence continued to struggle in game three, and it was looking extremely bleak for the defending champions.

Over the outstretched arms of a seven-foot-five Tacko Fall, Kyle Lowry lobbed the pass to the far corner where OG Anunoby caught the ball, and put up the shot, over the close-contest provided by Jaylen Brown, and the miracle shot swished through the net.

The Raptors avoided going down 3-0, and went on to force a seventh game against the Celtics despite looking largely overmatched throughout the series. The champs ultimately went down, but they went down swinging for the knockout.