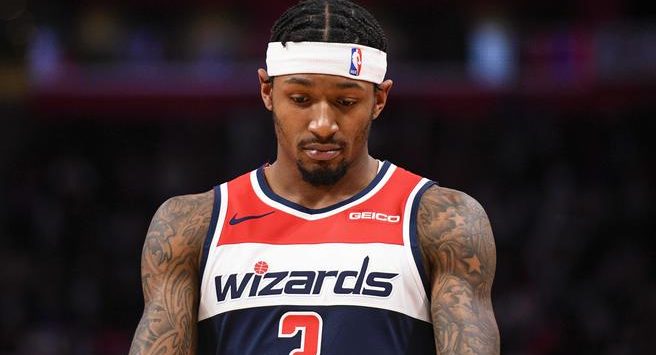 Bradley Beal is getting awfully frustrated and the entirety of the league is taking notice.

Could he become available in trade?

At this point in time, the injury and COVID-19 ravaged Washington Wizards have shown little willingness to discuss any trades surrounding their star shooting guard. The Wizards are currently 3-11, despite Beal leading the league in scoring at just a tick over 35 points per game.

If the Wizards don’t turn things around, moving Beal may make the most sense for the team long-term vision, especially because it appears that they will be strapped up by the Russell Westbrook contract for the foreseeable future. With James Harden and Giannis Antetokounmpo now off the market and the Wizards continued struggles, teams are also quietly positioning themselves at making a run at Beal.

“It’s what everyone’s talking about in the league,” said Brian Windhorst on his podcast. “There are executives out there… I’m just telling you this, I talk to them… who are talking about moves they can make going into this trade deadline, or moves they can make now that potentially set themselves up to make an even better Bradley Beal offer when that moment happens. Whether it’s in March, whether it’s in August. Whatever.

“There are so many people watching this, even though he is, to my knowledge, has not made any requests for anything.”

The Los Angeles Clippers, Los Angeles Lakers and Miami Heat are among teams said to be interested in Beal.