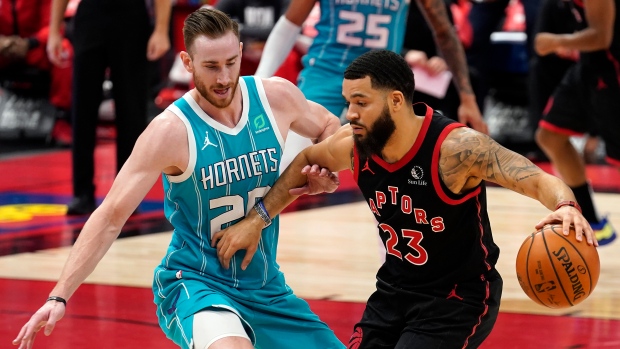 Two wins in a row can be classified as a win streak, right?

Let’s go with that.

If any team needs one of those right about now, it’s definitely the Toronto Raptors who improved to 4-8 following a tight 116-113 victory over the Charlotte Hornets.

Simply put, the Raptors put on a clinic on Saturday from the perimeter, hitting 21 three-pointers. Norman Powell hit six of his own, while OG Anunoby and Kyle Lowry added four and three respectively. This night was particularly important for Powell who poured in a season high 24 points after dealing with a fair bit of struggle in the season’s early going.

“Obviously he gets started early with a couple of shots falling, guys found him. Obviously, that puts a pretty good pep in his step,” said Nurse after the game. “I thought he was solid defensively. He was creating a little bit too. They were rushing out to him, he was driving into the paint, getting fouls and things like that, that has a lot to do with it.

“I know 24’s a big night, we know he’s capable of that, that’s what we need, we need his punch, 15 or so off the bench. We’re gonna need that offence, keep the offence ticking over with the second unit, etc.”

Meanwhile, as the Raptors continue to look for a fit for Aron Baynes, they once again got a huge performance from Chris Boucher who poured in 20 points and 9 boards off the bench. One of the few bright spots of the young season, it very much appears that Boucher is quietly turning into somewhat of a star that very few people are talking about.

With two key wins in hand, the Raptors will now turn their focus onto the Dallas Mavericks as they hope to string together a third straight victory.