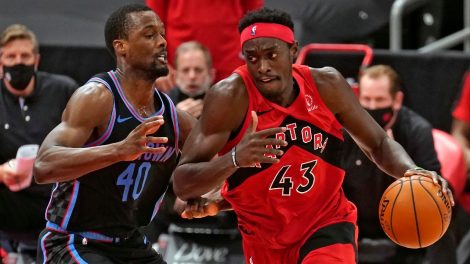 We’ve had it real good for a real long time.

This season ain’t it.

After trailing 68-58 at the half, the Toronto Raptors comeback bid came up just short as the Sacramento Kings were able to hold off the Raptors to secure their third straight victory. With the 126-124 loss, the Raptors fall to 7-12 as their road back to contention only continues to get tougher.

Often times, the Raptors continue to get into their own way, failing to overcome defensive breakdowns and limit the damage.

“The number of really obvious breakdown plays at both ends that we’re just not used to seeing, it gets tough to overcome when those get up towards 10 or a dozen or something like that a night,” said Head Coach Nick Nurse before the game. “Well, how do we overcome it? Well, we’ve gotta play really well. We’ve gotta play really well. I think, again, for the most part, there’s lots of games where we do play long stretches with those blatant, obvious breakdowns at both ends.

“[But] sometimes they’re just head-scratchers. They’re just head-scratchers and you’ve gotta just move on to the next play and then try to cut ’em down as we go here. Get more familiar, the chemistry develops, the communication develops, the rhythm of the offence develops a little bit, and then we don’t have them. And then if we don’t have them, we probably end up on the right side of the win-loss column.”

The Kings were able to overcome nine fourth quarter turnovers by shooting 55% from the field for the game, including 44% from long range. Meanwhile, the Raptors received a game-high 32 points from Pascal Siakam and 26 points from Fred VanVleet in the loss.

The Raptors will look to bounce back on Sunday when they take on the Orlando Magic.