Raptors Show Signs of Optimism in the Valley of the Suns

The Toronto Raptors were the victims of an extremely hot shooting night from the Phoenix Suns, as they left the “Valley of the Sun” with another loss. The Suns shot a blistering 52.5% from deep, on route to a 123-115 victory.

Pascal Siakam had a breakout game after a couple lacklustre performances, netting 32 points, nine rebounds, and three assists on 11/21 shooting from the field.

Siakam looked noticeably more assertive, aggressive, and decisive on the court, and he reaffirmed his commitment to winning despite the Raptors current struggles.

“I want to win, that’s all that I really care about. Obviously, I have to look at myself and try to figure it out, but at the same time I’m focused on winning, and that’s all I’m about,” said Siakam. 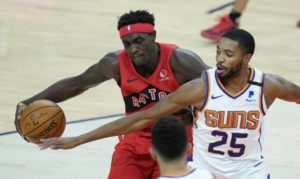 Toronto also showed positive signs that could lead to wins, as they performed much better at the three-point line and on the glass. The Raptors shot 14/35 (40%) from three, and out-rebounding the Suns by one despite Deandre Ayton’s efforts.

Fred VanVleet had 13 points, seven assists, and four rebounds in the loss, and after the game he expressed optimism in the signs the team showed against Phoenix.

“We going the right way, like I said, I just told that the guys we can’t do anything bout the ones we already dropped. If we look at this as an isolated game tonight, there’s a lot to build on, a lot of positives that we look like a team we know we are tonight,” said VanVleet.

“We made runs, we weathered storms, they made 21 threes, we hung in there, we fought back, we swung back all the way down to the end of the game and there’s a lot of things we could clean up obviously but, I liked our demeanour, I liked our swagger, I liked our approach tonight, and we just gotta continue to keep building and this is obviously a different year for all of us for many different reasons and sometimes you gotta change the scope of things and your perspectives, so continue to stay positive, I liked our approach and hopefully we can take all the good and leave the bad here in Phoenix and take the good with us on the road.”

An area the Raptors could look to improve on in the next couple games is at the free throw line, as the Raptors shot a sub-par 71.9% from the charity stripe against the Suns.

The Raptors will look to continue building on the optimism from Phoenix, as they continue their road-trip against the Sacramento Kings on Friday.

Nice read JP I feel like Nick nurse should bench Powell or we can trade him for mo Bamba or something. And play Matt Thomas and Flynn little more. What do you think??

I'm not 100% sold on Bamba as a rebounder, but he definitely hasn't gotten a chance to show off his abilities in Orlando and if the Raptors make a move for him I wouldn't be against it. Powell's been on and off so far but I imagine he'll turn things around on a consistent basis soon. We probably won't see much of Matt Thomas as his defence isn't good enough to crack the rotation, but Flynn might get more of a shot going forward after his game against the Kings!