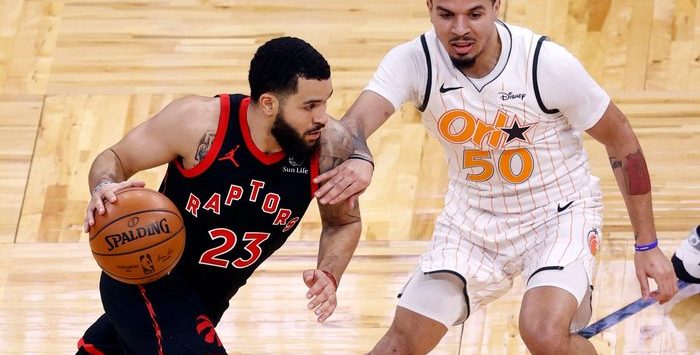 Fred VanVleet could not miss.

He caught fire and the Orlando Magic had absolutely zero answer for the undrafted guard out of Wichita State as he put up a franchise record 54 points, propelling the Toronto Raptors to a 123-108 victory.

Move over DeMar, VanVleet is atop the throne now.

Congrats to my brotha Freddy V! Kyle old ass couldn’t do it. Glad you did champ! Been telling you!

“It was just time. … It’s just time,” said VanVleet, who converted on 11 of his . “I’ve been missing a lot of open ones this season, more than I usually do, but it was time. Sometimes you get in that groove and you find that zone, and tonight I was able to do that and my teammates did an unbelievable job finding me and screening for me and getting me the ball in my spots. A lot of them were just catch-and-shoots.”

The 54 points also broke an NBA single-game mark for most points by an undrafted player. NBA Hall of Famer Moses Malone previously held the record with 53 points.

“It was only a matter of time,” VanVleet commented on besting DeRozan’s 52 point performance. “Every time I get a 30, I usually get a text from DeMar saying I’m weak for not passing his record. So I definitely had him in mind as I got close down the stretch.”

With the win, the Raptors improve to 9-12 as they creep closer to the eighth and final playoff seed in the Eastern Conference. It’s also worth mentioning that VanVleet was not the only player to score on Tuesday night, as Norman Powell made his return to the lineup and scored 23 points in the win, while Kyle Lowry finished with a 14 point, 10 rebound and 10 assist triple-double.

Next up for the Raptors, the new-look Brooklyn Nets!