Raptors 905 – The Developing Ground At All Levels

When people look at the success of the Toronto Raptors over the past half decade, they often point to players like Kyle Lowry, executives like Masai Ujiri, and Coaches like Nick Nurse. At the surface, they are key contributors to the organization’s overall success.

Even so, a lot of the Raptors’ success sustained in the late 2010’s and into the 2020’s can be attributed to the organization’s attention to development, both on the court with players, and in the office with its personnel. You don’t get a reputation as a premier franchise in player development without having a successful developmental program, and the Raptors’ not-so-secret catalyst is the Raptors G-League affiliate, Raptors 905.

The 905 has become that developing ground for players, coaches, and management alike, as many former 905-ers have gone on to bigger roles in the NBA and NCAA. But where did it all start? Who were the key figures in making the 905 happen?

It All Started with a Plan for Development 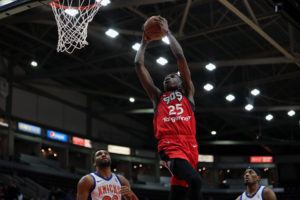 Going back as long as Bryan Colangelo’s tenure as Team President and General Manager, the Raptors were interested in adding a D-League affiliate (back when the G-League was known as the D-League) to where Raptors players can report to. That interest became a reality once Masai Ujiri came aboard to replace the outgoing Colangelo.

The Raptors were fresh off of picking a raw Bruno Caboclo in the draft, and they needed to find a place where Caboclo’s development would be prioritized while also having a close enough proximity to be able to monitor his progress. That’s when the organization purchased a G-League franchise for a reported six-million dollars, and the Raptors 905 was born.

This investment into a G-League franchise proved to pay off over the years, as players, coaches, and management have all benefitted from the experience they have gathered in the G-League. Former staff that have gone on to bigger roles include Jerry Stackhouse, who is now the Head Coach at Vanderbilt, Jesse Murmuys, who has had a couple assistant coaching stints in the NBA since his time with the 905, along with Dan Tolzman, who is the Raptors’ current Assistant General Manager and Vice President of Player Personnel.

A couple notable players have also come out of the 905 program, and you probably know them by now. Pascal Siakam, Norman Powell, Fred VanVleet, Jakob Poeltl, Delon Wright, Chris Boucher, Stanley Johnson, and Matt Thomas have all spent some time developing in the 905. 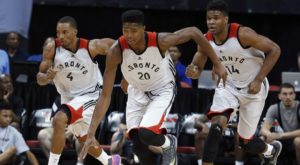 We know how well things turned out for Siakam, who was the D-League Finals MVP in 2017, VanVleet, who’s generating a considerable amount of All-Star buzz this season, and Boucher, who looks to be a contender for both the Sixth Man and Most Improved awards. The 905 has an undeniable pedigree of development, as even the Poeltl’s, Johnson’s, and Wright’s of the world can carve out their own niches that are rotation-worthy at the next level.

That pedigree of development can be attributed to the franchise’s willingness to allow players to learn the game and the system the best way possible: by playing. Head Coach Patrick Mutombo spoke with members of the media prior to this season’s tip-off, and he emphasized how important the work players do with the 905 is in order to make an impact at the next level.

“The best development is done through playing. Just getting on the court and doing that would be asked often at the Raptors. Winning, playing defence at a high level, but also being very efficient offensively. So as these guys get to play more minutes and a lot of minutes, and they’ll have opportunities to grow from it, but also make mistakes and things that we can revisit, and correct the best we can for the big team.”

The approach of gaining experience by doing the work is exactly how the 905 operates, from top to bottom. Everyone involved from the front office, to the coaching staff, to the players are all invested in getting better, and it’s no secret anymore that the 905 is one of the premier franchises within the G-League.

Who to Watch This Season

For many Raptor faithful, keeping a close eye on the development of Malachi Flynn and Jalen Harris will be a determining factor to tune into the short 15-game regular season.

Through six games, Flynn is averaging a team-best 20.8 points, to go along with 5.3 rebounds and 5.8 assists. Being the beneficiary of more playing time as well as a greater role within the 905 offence, Flynn looks to continue impressing at the G-League level until his next opportunity with the big club arrives. That opportunity for Flynn could come sooner than expected, especially with Lowry trade rumours going around as of late.

Harris has also started to get comfortable in Orlando, as he dropped a season-high 32 points against the Salt Lake City Stars on the second day of a back-to-back. The Raptors drafted him mainly for his ability on the offensive side of the ball as a scorer, and he’ll look to continue sharpening his game in all-aspects as a whole.

Some notable veterans on the team include Mississauga’s own Nik Stauskas, and Gary Payton II. Both have spent time in the NBA, and look to be veteran voices to depend on both in the locker room and out on the court. Dewan Hernandez’s deal with the big club was non-guaranteed prior to the season, and while he was waived, he looks to make a statement in Orlando after hardly having any on court time during the past year due to injuries.

Other notable players include training camp invitees Alize Johnson and Henry Ellenson. Both are making a considerable impact for the 905 in Orlando. Johnson’s energy and effort on defence has been invaluable to the 905’s success thus far, and Ellenson is the team’s second leading scorer, averaging 18 points a game.

This season for the 905, and every other team participating in the ‘gubble’ is crucial, as they will only get a short amount of time to put things together. For the players, this 15-game regular season is a chance to prove their merit at the next level, so expect a high level of competition and effort from the youngsters and vets alike.