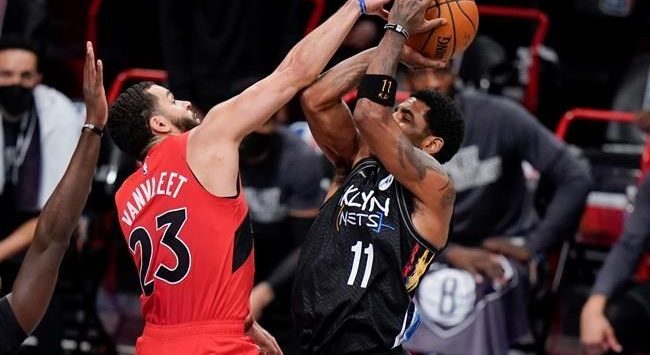 Toronto Raptors Beat the Nets in a Strange Night in Brooklyn

What a strange night.

The Toronto Raptors earned a hard fought victory, but the story of the night was Kevin Durant.

The Brooklyn Nets superstar was unable to start the game after an inconclusive COVID test. He would rejoin his team shortly after the start of the game when it appeared as though Durant was cleared to play. Then, in an absolutely bonkers turn of events, Durant was forced to leave the game due to the league’s health and safety protocol after already playing in nearly 20 minutes of game action.

Safe to say, Durant was not happy at all after a call that left both the Raptors and his Nets teammates confused. Furthermore, Durant has already been ruled out for the Net’s Saturday night tilt against the Philadelphia 76ers, while the Raptors are expecting to travel to Atlanta tonight.

“It was confusing, frustrating, bizarre,” said Nets sharpshooter Joe Harris following the game. “For him to not start, then play, then he couldn’t play, just doesn’t make any sense. But, I don’t make the decisions. I just work here.”

I’m no expert on the league’s COVID-19 protocol, but something doesn’t add up in my head.

Anyways, all the confusion aside, the Raptors have fought their way back into an Eastern Conference playoff spot, pulling off a 123-117 victory on Friday night.

On a night in which the whistle was incredibly lopsided to say the least, the Raptors received a massive boost from their All-Stars. Pascal Siakam finished with 33 points, 11 boards and six assists, while Kyle Lowry poured in 30 points of his own to go along with seven dimes and five rebounds.

“I think we were ready and I think that’s the main thing,” Raptors coach Nick Nurse said. “We believed we could come in and win from the start and even though it got a little kind of stop-startish and herky jerky there for lots of stretches, we kind of kept playing and hanging around and made some really big plays at the end.”

As usual the case in big games, Lowry was huge down the stretch, hitting a clutch three-pointer later and scoring 11 of his 30 points in the final frame. When the Raptors needed a big play, it came from their “bandaid-ed” point guard, who was just trying to get his Nelly on.

“We missed some open looks and Lowry made some big shots,” Nets coach Steve Nash said. “We gave up offensive rebounds and turned the ball over. And you add it all up and they found separation in the last couple of minutes.”

Improving to 10-12, the Raptors inch closer to .500 and will take on the Atlanta Hawks tomorrow night (tentatively?).