Waiver Wire Must Adds Going into Week 9 of Fantasy Basketball

The injury bug is starting to hit a lot of NBA teams, and it’s not even COVID-19 that’s forcing players off the court this time. With the being said, there can be major value waiting to be found in the waiver wire of your fantasy basketball league. Here are five players you should add moving forward into week nine of fantasy basketball. 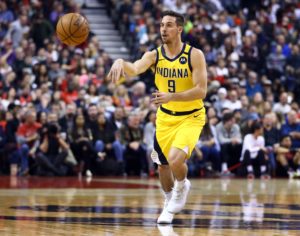 T.J McConnell is the assists king off the bench for the Pacers. He’s currently averaging 6.6 assists on the season, and he’s only rostered in 30% of Yahoo! Sports leagues. While its certainly tough to take in his difficulties scoring, and he can have the occasional turnover, a lot of people are underestimating just how difficult it is to get a high-assists producer like McConnell in today’s NBA.

The days of having multiple players average 12+ assists are gone, but McConnell will give you six a night almost guaranteed. If your fantasy team doesn’t struggle to score, or if you’re looking to exploit a matchup against a team that’s devoid of assist production, McConnell is your guy to add for the upcoming weeks.

Up until this point of the season, if you added Jakob Poeltl to your team, you’d be getting a couple blocks a night, along with some solid rebounding numbers on efficient shooting. With LaMarcus Aldridge out of the lineup due to knee swelling, Poeltl’s been able to get the lion’s share of the minutes at the centre position.

You’re still going to get more of the same from Poeltl in terms of blocks, rebounds, and efficient shooting, with the upside that he could put up more points in the increased run time he’s getting on the court. He also gets the occasional assist and steal, and almost always makes the hustle plays that help teams win. Consider adding Poeltl for week nine, at least as a filler until Aldridge comes back. 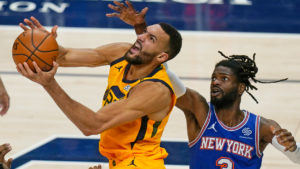 With the news of fantasy star Mitchell Robinson’s injury, Nerlens Noel’s been added to 50% of Yahoo! Sports fantasy leagues, so if you were eyeing Noel for his blocks and rebounds, it may already be too late to add the defensive specialist. If you’re fortunate enough to still see Noel on the waiver wire, pick him up immediately.

He’s averaging two blocks a game in the limited amount of playing time he’s gotten behind Robinson, and his overall productivity looks to increase in a starter’s role. Noel’s had a couple games this season where he’s swatted away five plus blocks, and he’ll likely have more of those type of performances moving forward. Blocks are another category (like assists) that can be hard to come by at times in fantasy basketball, making players like Noel even more important to consider rostering for your team. 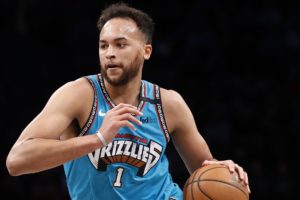 Kyle Anderson had a hot start to the season, putting up star-like fantasy numbers. He eventually cooled down a bit, and a lot of managers decided to jump ship. In reality, Anderson wasn’t going to sustain that level of production over the course of an entire fantasy basketball season, but he will still provide solid production in three to four categories every night.

Anderson’s putting up 13 points, 6.3 rebounds, and 3.8 assists on the season, and he’s grabbing about two rebounds off the offensive glass every night. He’s worth a look especially in 8-cat and 9-cat leagues, and he’s only going to get more minutes for the foreseeable future as Memphis continues to deal with injuries (Brandon Clarke namely).

It seems like most managers have picked up Anderson, as he’s rostered in 62% of Yahoo! Sports leagues, so if he’s still sitting in your league’s waiver wire, go grab him immediately. 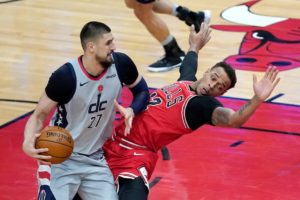 Alex Len hasn’t had much of a chance to shine so far this season, as he was the third-string centre on the Raptors before he was waived. Now, Len is the starting centre for a Washington team that lost Thomas Bryant to injury, and looks to have no plans of demoting Len from his role.

If you decide to add Len, he’s gonna give you a decent amount of points, rebounds, and blocks, and on decent efficiency which is a bonus. He can also hit the occasional three if left open, which still surprises teams when Len flexes his shooting stroke with confidence.

Rostered in 11% of Yahoo! Sports leagues, Len is worth a look if none of the bigs listed above are available in your league’s waiver wire.