The Toronto Raptors have snapped their nine-game slide in March as they defeated the Denver Nuggets 135-111 on Wednesday night. Pascal Siakam bounced back after reportedly butting heads with Coach Nick Nurse, as he put up an all-round stat line to the tune of 27 points, eight rebounds, and six assists on an efficient 50% field goal percentage on 16 shots, while also going eight-for-nine from the charity stripe.

TSN put together a wonderful broadcast with an all-women led crew, the first of it’s kind in NBA television history, and the Raptors played one of their more complete games of the entire season. All of that was admittedly great, and yet the biggest storyline heading into Wednesday’s game was Thursday’s impending trade deadline. 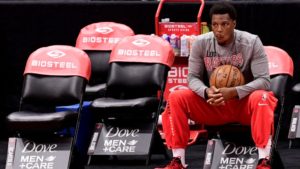 Was this game going to be the last game we see Kyle Lowry and Norman Powell in a Raptors jersey? Both players have been the subject of trade talk and rumours around the league, especially since the Raptors’ slide from a mid-tier playoff team a month ago to a potential lottery team after the recent nine-game slide. Oh how quickly things change.

Powell and Lowry didn’t leave anything out there on the court. Stormin’ Norman continued his dominance as a starter, as he finished with 22 points in 24 minutes. Lowry, who is widely regarded by many, if not all pundits and fans alike as the G.R.O.A.T. (Greatest Raptor of All-Time) finished the game with a characteristically familiar stat line.

Lowry finished with eight points, nine rebounds, and five assists, but was the most important player out on the court according to box-plus-minus. He was a plus 42 on the night, just four shy of breaking Mark Jackson’s franchise record.

It would’ve been just one more franchise record to add to the list of records Lowry owns, as he’s the franchise leader in assists, steals, threes made and attempted, triple doubles, and win shares.

Lowry’s game throughout his career in Toronto has been about making the right play and making his teammates around him better. That was no different tonight, as the veteran took a back seat to the hot shooting of Powell, Siakam, Fred VanVleet, and the rest of the Raptor youngsters. Toronto finished with a franchise-best 24 threes made on the game.

After the game, Lowry was uncharacteristically (by his words) candid about his feelings playing in what could be his last game with the Raptors.

I’mma be honest. Usually I bullshit y’all, but tonight was kinda weird.

Lowry noted that while it was flattering to hear your own name be the subject of many trade rumours and talk around the league, he still doesn’t know what he wants (as of the postgame scrum) when the deadline hits 3pm EST. It’s also worth noting that Drake FaceTimed Lowry during his postgame media availability.

Much of the decision to move on from Lowry and Powell will likely be dictated by what packages are available, along with Masai Ujiri (and specifically for Lowry) Lowry’s willingness to be traded. Regardless of which teams land Powell or Lowry past the deadline, it’s clear that both have meant a lot to the franchise over the years.

Powell expressed his desire to stay in Toronto during his post game interview.

My roots are here. I’ve given everything to the franchise. Obviously I wanna stay here…But I understand it’s a business.

In Lowry, whichever team is lucky enough to have his name on their roster sheet will get a bonafide winner. A player who’s willing to work harder than anyone on the court to get a win. A player who will take a charge against the Zion Williamsons and the Joel Embiids of the world.

I’m not the tallest, I’m not the most athletic, I’m not the fanciest, but I play hard. It’s gotten me a long way, playing hard…I won’t regret anything I’ve done because I’ve played my butt off. – Kyle Lowry