Three NCAA Prospects to Watch in the Sweet-16 Onwards

March Madness is in full effect, and while COVID-19 has affected the tournament, along with the usual upsets in the first and second rounds, brackets have been busted. Nonetheless, an intriguing group of young players enter the sweet-16 portion of the tournament with an opportunity to improve their draft stock. This opportunity will prove fruitful for some, while others will continue to solidify their spots in the lottery. Here are three prospects to watch in the Sweet-16 onwards.

Suggs and the Zags have been on a roll throughout the entire college basketball season thus far. Leading Gonzaga to a perfect 28-0 regular season, Jalen Suggs has been a focal point within the nation’s top offence.

A gifted passer, and considered one of the best playmakers in the 2021 draft class, Suggs is ready to run an NBA offence for the team lucky enough to select him on draft night. He’s shown the ability to find teammates in transition with ease, and Suggs is a willing passer who’s always looking to make the right play. 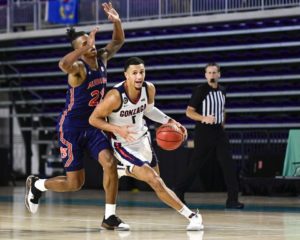 He also has great size at the point, utilizing his 6’4, 205 pound frame to maneuver his way through opposing defences. Suggs routinely utilizes his size to pressure opposing guards on defence, as he averaged 2.6 steals in the regular season. He is a sound defender that moves well laterally while also having the ability to make timely closeouts which make him a solid team defender.

Suggs also possesses good potential to develop into a scoring threat at the next level, as he’s got the athleticism and bounce off the dribble to become a dual threat playmaker and shot-creator.

Suggs doesn’t have much he can do to further his draft stock at this point, especially in the big dance. He’s already projected by most big boards to be drafted in the top five, and he has very little weaknesses in his game to note. The only parts of his game that really look to be causes for concern currently are his turnovers. He averaged 2.8 turnovers a game during the regular season. Nonetheless, like many freshmen guards, Suggs will likely clean up this part of his game as he continues to mature. Mobley is the top big man prospect in the 2021 draft class. His rare blend of size, skill, and athleticism has been a wonder for USC this season, who lost their previous star centre Onyeka Okongwu to the draft last year. The Trojans finished with a 24-7 record on the regular season, and look to make even more noise on their way to the elite-eight and onwards.

For a player of his size, Mobley possesses the ability to move around the court like a guard. He’s not the most explosive athlete, but his movement would be best described as a graceful waltz up and down the court, something you rarely see from a seven-foot big man.

He shows a good amount of potential on offence, as he’s got a solid face up game, post-up, jump shot, and instincts as a playmaker that point towards some upside down the line. Mobley’s shown the ability to handle the ball, and could develop into an Adebayo-type ball handler with more reps and experience in the NBA. With such a solid foundation, the team that ends up selecting him in the draft will play a major role in how Mobley develops and transitions his game to the next level.

Mobley’s main strength lies in his length, as he has a seven-five wingspan which he utilized to swat three blocks a game during the NCAA regular season. His above-average athleticism and length allows him to be a difference-maker on defence, both on the ball, and on switches.

The main area of Mobley’s game to keep an on is his assertiveness, as there have been times where a lack of assertiveness has hurt him. A couple big outings in the sweet-16 and further would definitely benefit him, but regardless, his spot within the top-five has been solidified throughout the season. Mobley is simply one of the can’t miss prospects just based off the potential alone. 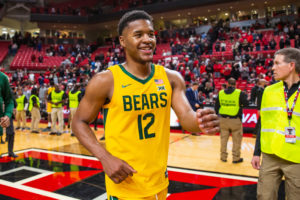 Butler is a 6’3 guard out of Baylor University. He along with Davion Mitchell have been one of the nation’s top backcourts, leading Baylor to a 24-2 record during the regular season.

Butler looks to be a decent option as a secondary playmaker in the NBA, as his assist numbers (4.8 per game during the regular season) came while sharing ball-handling responsibilities as a secondary creator. Time will tell if he can develop into a lead guard, but he currently projects to be a highly efficient combo-guard that can occasionally make plays for others.

He’s also shown the ability to be a defensively sound guard despite his frame, as his defensive IQ and quickness allow him to stay glued to assignments on and off the ball.

His 190 pound frame may leave much to be desired at the next level, as Butler doesn’t have an otherworldly first step or explosiveness to his game that can help him attack opposing defences in the NBA where defenders are bigger, stronger, and faster. Bulking up would definitely help in that area, as his game is dependent on his ability to attack the basket which opens up his playmaking and shot creation out on the perimeter.

A couple of marquee performances moving forward can definitely benefit Butler’s draft stock, as he currently projects to be anywhere from a mid-first round pick, to an early second-rounder. Butler is one of those players that in the right situation, could develop into a solid rotation guy.