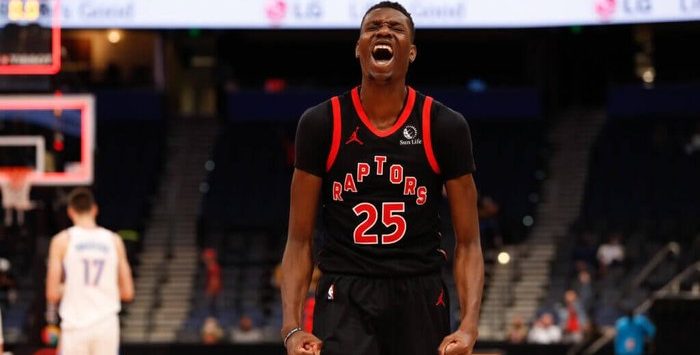 Boucher, Dort Go Off in a Battle that Put Montreal Basketball on the Map

Sunday was a proud night for Canadian basketball.

As the Toronto Raptors squared off against the Oklahoma City Thunder, three Montreal natives shined on the court in what was a historic moment for the province of Quebec.

Chris Boucher went off for 31 points and 12 rebounds, while Lu Dort led the Thunder with 29 points. The third Montreal native Khem Birch, the Raptors newly acquired center, earned the start and finished the night with seven points and six boards, en route to helping Toronto secure a 112-106 victory.

Thanks to @LeoRautins and @Matt__Devlin for spotlighting the Basketball talent, past and present, that Montreal and the Province of Quebec, has. Couldn't be more PROUD. 🇨🇦 🏀 👏🏿👏🏿👏🏿

“For me, it was more about Montreal. I really wanted to kinda put Montreal on the map a little bit, just to make people realize we have talent in Montreal,” said Boucher following the game. “Honestly, you’re only seeing three guys but I know a lot of guys that are from Montreal that actually are really talented, they just don’t get the chance to leave the country. That’s what was exciting for me, that all three guys really played well and it was a really exciting game just to showcase what we’ve got.”

“It was cool to see three Montreal guys on the court just because Montreal is still an underdog city and we have so much talent there and there’s so many kids coming up and I feel like there’s gonna be way more NBA players from Montreal,” Dort said. “So me, Khem and Chris we all have different backgrounds and we’re all from Montreal but we all went to different places, we all had different routes so it’s not gonna be easy to get to this point and to this level but I know a lot of kids are gonna do it. They’ve just gotta work hard.”

In what was a truly remarkable night for Canadian basketball as a whole, the Raptors secured another much needed win – depending on what you consider much-needed that is.

The Raptors now have a few days off before they take on the Brooklyn Nets on Wednesday.