The Shocking Inefficiency of Siakam, Trent, VanVleet, and Baynes

The NBA is a make or miss league, and the Raptors for their part have missed a lot of shots this season.

In this article, we’ll look at just how inefficient these four players have been, and how much can be done to remedy this as at least three of them are expected to remain with Toronto beyond this season.

Kyle Lowry’s 43.6% from the field may not look great, but shooting a scolding hot 39.6% from beyond the arc on over seven attempts per game brings his eFG% to a respectable .546%—his highest mark in three seasons.

While Hood and Johnson aren’t expected to contribute much on offense, and Malachi Flynn is still a rookie, the other low-efficiency scorers are taking a large chunk of the Raptors’ offensive possessions—almost always to the team’s detriment.

In 15 games for Toronto, Trent Jr. has averaged 16.5 points per game on .513% eFG. This includes shooting a slightly above league average 37.6% from the three-point range, and 42.2% from the field overall.

You might argue he’s 22 and that he can improve on these things by the time he enters his prime—I call this the Trent trap. Whether he was playing for the Duke Blue Devils or the Portland Trail Blazers, Trent Jr. has always been an above-average 3-point shooter who is below average at just about everything else.

If you only watch him play for five or six minutes, he looks great—he hustles, steals the ball, hits a contested pull-up jumper over a guy, and pounds his chest. But if you keep watching, you’ll notice him end the night 5-for-18 in a losing effort. He gambles for home runs on defense and stops the ball on offense. But he’s just so noticeable. 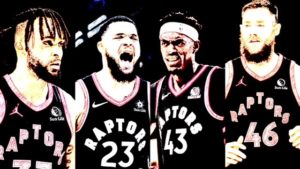 Is it his hair? The high motor? The flashy plays? The big shots? I’m not sure how or why people fall for the Trent trap, but they do.

Trent is up for a major payday in the offseason and the Blazers reportedly weren’t willing to raise their initial offer of four years, $56.8 million.

While most pundits would call the midseason swap of Norman Powell for Gary Trent Jr. a lateral move —some Raptor fans have more enthusiasm. By the numbers, Trent still has a long way to go before he reaches Powell’s heights as a defender. He’s even further away from matching Norman Powell’s offensive efficiency or intangibles.

With limited size, length, athleticism, and vision, these aren’t things that Trent. Jr. can be expected to reasonably develop either. He is what he is — a cross between Nick Young and JR. Smith.

If there’s a silver lining with Trent, it’s this —he’s remarkably consistent at being who he is—a low turnover, high energy, high usage, non-passing, low-efficiency alpha dog looking to get his come hell or high water.

The Raptors have been grooming Fred VanVleet as their point guard of the future for years—but as Lowry looks to leave Toronto this offseason, fans may realize Fred was much better off being Lowry’s teammate than his replacement.

The comparisons are obvious—strong leaders, tough, defensive-minded, undersized pesky guards who can shoot the ball.

The difference between them is almost entirely cerebral—Kyle’s feel for the game has always been miles ahead of VanVleet’s. Even in Memphis and Houston, it was fairly obvious Kyle saw the floor and could feel the game in a way very few others can.

Fred’s no slouch, but expecting him to fill in for Lowry is completely unrealistic. They’re on entirely different wavelengths in terms of top-end potential.

VanVleet signed a four year-$85 million extension in the offseason with the Raptors and will turn 27 next season. 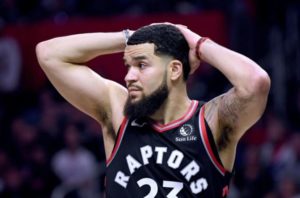 VanVleet and Trent have a lot in common. Neither has great court vision or burst—both are prone to dribbling the air out of the ball as the offense crawls to a standstill. VanVleet also suffers due to his lack of size, athleticism, and ability to consistently create off the dribble.

Fred’s stronger than most point guards and prefers to barrel through them because he’s not fast enough or big enough to go over or around anyone at the NBA level.

If you had to pick between them, the obvious choice is to roll with Fred VanVleet. Whatever Fred gives up on offense with his subpar efficiency, he more than makes up for with great defense and leadership.

For 2020-2021 Fred VanVleet’s usage rate has slowly climbed up to a career-high 23.9%. This rate needs to drop by at least five to seven percent if the Raptors hope to win basketball games next year.

Spicy P has been anything but sizzling from the field for nearly two years now. His fans are quick to note the laundry list of excuses for Siakam’s struggles—rust, injuries, new to basketball, Kawhi left, he’s not used to double-teams.

The truth is actually so much simpler —Pascal Siakam isn’t a very good scorer in the half-court.

Every single team in the NBA has at least one player who can reasonably defend Pascal Siakam—some even have two or three. The scouting report is quite simple — back off two feet, and if he drives send help. When he was playing with Kawhi Leonard and Marc Gasol, the lanes were open and teams were willing to live with Siakam going off to prevent the Raptors shooters or Leonard from obliterating them.

It’s a game of tradeoffs and you can’t stop everyone and everything.

With Gasol and Leonard now in Los Angeles, Siakam finds himself facing the same defenders teams used to put on Kawhi—and as we found out in the playoffs last year, Pascal Siakam is no Kawhi Leonard. 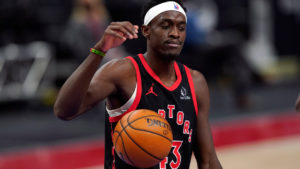 The 3-and-D wing is becoming a bit of a fashionable trend in the NBA— every team is looking to add one of these players to defend guys like Luka, Giannis, LeBron, KD, and Kawhi —the same way teams used to stock up on lumbering seven-footers to guard Shaq, Patrick Ewing, and David Robinson.

Be it Celtics’ guard Jaylen Brown, Warriors forward Kelly Oubre Jr, or fifty other players who fit that mold. Siakam lacks the lower body strength of a player like Julius Randle to punish smaller players in the block, and the shooting stroke of someone like OG Anunoby to keep defenses from sagging.

He’s neither creative enough nor athletic enough to score efficiently from anywhere on the court.

Much like Fred VanVleet, Pascal would benefit greatly from playing with a better player and lowering his usage. And like VanVleet, Siakam’s true value to the Raptors is on defense. As a defender and occasional playmaker, Siakam still brings a lot to the table for the Raptors.

One might hope that instead of forcing him to be the first option, the Raptors can learn to use him in a role that better suits his skill set.

As a tertiary scorer, Siakam could absolutely thrive. He doesn’t have the same feel or raw athleticism as someone like Shawn Marion, but he’d be best suited to a very similar role as the one Marion played in Phoenix.

Playing with Steve Nash and Amar’e Stoudemire made Marion an All-Star and one of the league’s most valuable role players—a role that would still partially justify the hefty max contract he signed last season.

Aron Baynes in 2020-2021 was arguably worse than all of them combined. That’s actually unimaginable given the year he had in Phoenix last year. 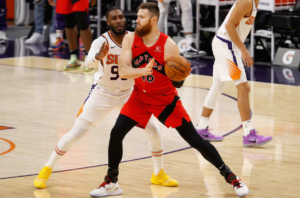 Baynes entered the season with such a funky release, it was almost as if the aliens from Moron Mountain came to earth and stole every shred of talent he possessed. At 34-years-old, the type of production dip Baynes has seen year-over-year from 2019-2020 is hard to comprehend—a ten percent dip in his overall true shooting percentage.

Playing with Baynes no doubt impacted everyone else’s efficiency as well. Teams weren’t even guarding him by mid-season.

Opponents have been happy to leave Stanley Johnson, Freddie Gillespie or DeAndre Bembry open, but playing with Baynes as a teammate is literally akin to playing 4-on-5. Baynes will almost certainly end his Raptors tenure having never played a single game in Toronto.

And I think I speak for a lot of Raptor fans when I say thank goodness for that.

Have you ever played?I really don't think so.But you are a fair philosopher.Give up on Basketball analysis.