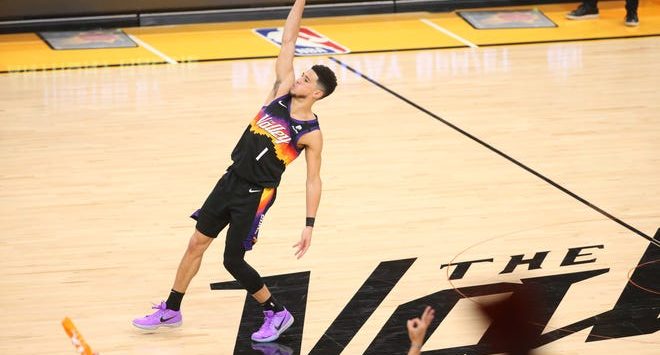 The Phoenix Suns are so close.

One of the most incredible turnarounds in sporting history is almost completely as the Phoenix Suns used a 118-108 victory to get one step closer to basketball immortality.

On a night in which the Suns simply had no answer for the dominance of Giannis Antetokounmpo, Phoenix put together a master class of offensive basketball, dishing out 26 assists and knocking down 20 of their 40 three-point attempts. The ball was humming all night long as the Suns continued to make timely three-pointer after timely three-pointer en route to the Game 2 victory.

Leading the charge for the Suns on Thursday was Devin Booker who finished the game with 31 points, while dishing out six assists and grabbing five boards in the process.

“Those are the moments that he lives for,” Phoenix coach Monty Williams said of Booker following the win. “Doesn’t run from it. He just steps up and makes big plays. The thing about Devin, he shoots the same way first quarter, fourth quarter, doesn’t matter, his shot looks the same. That’s a guy that’s put a ton of work in his shot, but the mentality, he’s calm in those moments. So, we’re grateful for those contributions in those moments.”

Two other members of the Suns finished with more than 20 points as Chris Paul had 23 points and eight assists on the night, while Mikal Bridges added 27 points of his own to go along with seven boards. Ayton, who had his struggles throughout the evening came up big in the final frame and finished with yet another double-double.

With little room for error as the series moves up north to Milwaukee, the Bucks will need to find a way to get Antetokounmpo’s co-stars, particularly Jrue Holiday going if they hope to stand a chance against the scorching Suns.

“Just keep talking to him, keep telling him to be aggressive,” Antetokounmpo said when asked what his message for Holiday would be heading into Game 3. “No matter what’s going on, you’ve got to stay aggressive and you cannot get in your feelings. It’s hard not to. You know, NBA Finals, 20,000 people booing you and all that, it’s kind of hard.

“But at the end of the day, it’s not about me. It’s not about him. It’s not about Khris [Middleton]. It’s not about Coach. It’s about all of us. … If there’s a game that you’re 3-for-12 or whatever the case might be and you can rebound the ball or get a steal or do something else to help the team win, that’s what it’s all about right now. I think he understands that.

“I know he’s going to be there when we need him the most and I don’t worry about it. He’s a great basketball player. He’s played great all year and he’s going to continue to play great for this team.”

As the pressure continues to mount, it’s time for the Bucks to really wake up if they hope to keep this a series.