When you think about the greatest players to ever don the Raptor uniform, a couple names come to mind right away. How could anyone exclude names like Vince Carter, Kyle Lowry, and DeMar DeRozan? Naturally, members of the 2018-19 Championship squad would also be in consideration for this G.R.O.A.T team.

With that being said, a lot of great players have come in and out of the organization over its time in Toronto. Here are the players that you would see on the bench of a team consisting of only the best to ever wear the Raptor jersey. 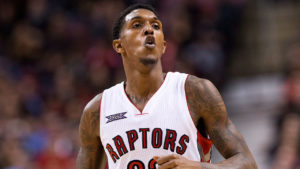 Sweet Lou was instant offence off the bench for the Raptors in the mid-2010s. Coming off two injury-riddled seasons in Atlanta, the Raptors took a flier on the guard when it seemed the NBA had given up on him. He stepped into the sixth man role as he began getting more and more minutes as the season rolled along. Williams had his breakout game on a Saturday night in Cleveland, dropping a then career-high 36 points in a blowout win.

He became a fan favourite overnight among the Raptor faithful seemingly overnight, as every time he would check into a game Williams would be greeted by chants of “Louuuuuuu.” Lou Will was so popular that Drake even released a track inspired by the sixth man, appropriately titled “6 man.”

While Williams’ time in Toronto was short lived, and despite his comments on the city in later years, his play that season and his reputation among the fans were so memorable.

Without a doubt, Lou is one of the best Raptors to ever come off the bench for the team, and to this day he’s the only Raptor in franchise history to win the Sixth Man of the Year award.

Honourable mentions: Cory Joseph, Jarrett Jack, and Greivis Vasquez. All guys were extremely steady as backup point guards during their tenures in Toronto. If you’re looking for a more traditional point, I wouldn’t look any further than these three. 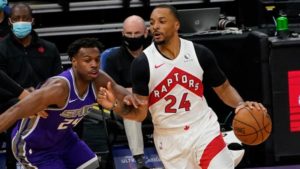 Another fan favourite, Stormin’ Norman is a player most fans are familiar with. His time with the team lasted throughout nearly the entire golden era of Raptor basketball, coming in as a rookie in 2015-16.

He had a boatload of memorable moments while playing for the Raptors.

His play in the 2016 round one matchup against Paul George and the Indiana Pacers was a precursor to his eventual success as a Raptor, culminating in a steal and fastbreak dunk that proved crucial during a closely contested game five.

It felt like Norm soared through the air forever as he tied the game and completed a Raptor fourth quarter comeback when all seemed lost.

It was the moment that fans began to believe that just maybe, the Raptors could finally get over their postseason struggles. The Raptors went on to have their most successful postseason run prior to 2019, as they made the Eastern Conference Finals for the first time in franchise history.

Norm continued his steady growth as the years went on, as he was a part of the “Bench Mob” and eventually graduated into the starting lineup for a majority of last season before getting traded.

The Bucks got lucky they didn’t see Powell in the playoffs this year, as we know he’d routinely torch Milwaukee everytime the Raptors played them.

Honourable Mention: Vonshon Lenard. Admittedly too young to have seen Lenard play for the Raptors, but with some research, the one season he spent in Toronto was a productive one. Like Lou Will, he was also a microwave off the bench, averaging 14.3 points during the 2002-2003 campaign. 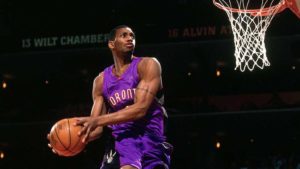 McGrady is one of the more popular players to wear the Raptor jersey, as his throwbacks are routinely made available to purchase by Mitchell & Ness. Coming into Toronto straight out of high school, T-Mac came into his own during his third season with the team.

He put up averages of 15.4 points, 3.3 assists, and 6.3 rebounds per game while playing 31.2 minutes off the bench in 1999-2000. He and his cousin Vince Carter became a dynamic duo on the court as they provided sportscenter with jaw-dropping highlights in nearly every game they took part in.

The Raptors were swept in the first round that year by the New York Knicks, but there was a clear sense of optimism that as long as both Carter and McGrady were around, the Raptors would be back to contend in the playoffs again.

That offseason, McGrady signed with the Orlando Magic, and while the what-ifs and what-could-have-beens surrounding McGrady staying in Toronto are still discussed to this day, He was without question one of the best to ever play for the city.

Honourable Mention: Tracy Murray. One of the OG bucket getters from the inaugural squad, Murray was one of the more reliable scorers for that team. He put up 16.2 points per game while mostly coming off the bench.

He left for Washington the following season, but returned to Toronto for two seasons from 2000-2002. Murray was a mid-range assassin, and actually shot the three at a great clip. Definitely ahead of his time, let the highlights speak for themselves. 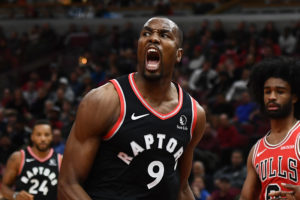 Serge Ibaka, aka Mafuzzy Chef is a man of many talents. A star chef, a fashion icon, or rather, he doesn’t do fashion, he does art. No matter how you put it or how you remember him, he is one of the greatest players to ever play for the team.

While Serge did end up starting most of his games in Toronto, it felt wrong to leave him off the list. He famously took a reduced role on the bench after the Marc Gasol trade, and it’s easy to forget he was amidst a career year.

He continued to thrive on the bench, and for his role on the most successful Raptor teams, there was no way Ibaka wouldn’t be mentioned.

With all his moments on the team, by far his most memorable, impactful, and important moment was his game seven performance in round two of the 2019 postseason against the Philadelphia 76ers.

Ibaka up to that point hadn’t been having the best series, as most of the Raptors aside from Kawhi Leonard struggled to shoot it well from the field. The proverbial lid was on the basket for both teams, as shots just weren’t falling through the net.

It was there, seemingly out of nowhere, Ibaka became the unsung hero for the Raptors. He put up 17 points, eight rebounds, and finished with a team-high in plus-minus with a +22 on/off rating. His plus-minus alone attests to his impact on that game, as his presence was felt every time he stepped on the court.

If you could sum up Ibaka’s tenure with the Raptors in one word, I’d argue the word to choose is intensity. Serge always came up clutch in the big games for the Raptors.

His three against the Sixers, countless blocks, his signature energy on both ends, and on the glass, all that was apparent whenever he stepped out on the court. He was certainly productive statistically, but his energy and impact on winning is what ultimately makes him one of the best to ever play in Toronto. 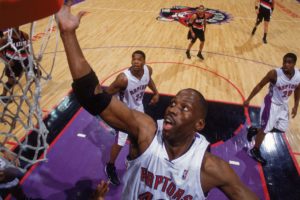 Kevin Willis was the savvy veteran presence during his time with the up and coming Raptor team that featured a young Vince Carter and Tracy McGrady. Serving as a mentor for the young players, while also being a productive bench player proved pivotal for a team looking to make the jump from good young team to playoff contender.

He and fan-favourite Charles Oakley served as the “enforcer” core at a time where toughness and physicality was still the norm around the league.

Honourable Mentions: Bismack Biyombo and Jakob Poeltl. Both were extremely impactful during their times with the team. Biyombo had an unforgettable playoff run, and Poetl showed flashes of productivity while being a member of the bench mob. Both are deserving of recognition here as well.

Next time, we’ll dive into what the starter will look like for the G.R.O.A.T team.