Who are the players that would make the greatest Raptor team of all-time? Last time we explored what the bench of that team would look like. Admittedly, there weren’t nearly as many options for the bench compared to the starting lineup.

A lot of great Raptors have started for the team over the years, and here’s the best of the best, with a lot of honourable mentions. 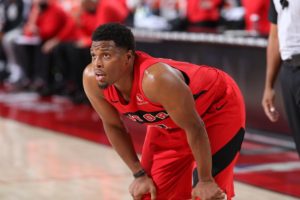 Any list with the greatest Raptors ever is incomplete if it doesn’t mention Kyle Lowry. The consensus among nearly all Raptors fans, players, executives, and media members that cover the team is that KLOW is the G.R.O.A.T.

His impact on the court was evident from his first game suiting up for Toronto with that number three jersey. In nearly every season he played for the team, he was a constant impact on winning, and that was evident with his ability to turn any lineup into an effective one as long as he was out on the court.

During his tenure, the Raptors always went as far as Lowry could take them. He, like many on this list, elevated the Raptors to new heights.

Lowry led the upstart 2013-14 team to their first postseason since 2007 at the time, and that began the renaissance and eventual golden age of Toronto basketball.

There are too many moments to choose from if you were to pick the most memorable. The likely contenders are his first quarter performance in game six of the 2019 finals, his steal and assist to Kawhi Leonard in the game six of the eastern conference finals, and his game six performance against the Boston Celtics in 2020.

Unquestionably the greatest raptor of all-time, and it probably won’t be debatable anytime soon.

Honorable Mentions: Damon Stoudamire, Fred VanVleet, and Jose Calderon. The Raptors have had many great guards throughout their history.

A guy like T.J. Ford barely missed the cut here as Stoudamire, VanVleet, and Calderon all either have greater impacts, longevity, and statistics that go in their favour.

Mighty Mouse was the first franchise player. VanVleet had a pivotal role in the 2019 championship team and is a current star for the team.

Calderon was quietly one of the most efficient offensive players in the late 2000s and 2010s. All of these three deserve recognition, and honestly if Lowry never suited up for Toronto, one of these point guards would probably replace him. 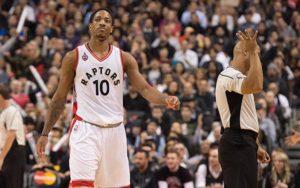 “Don’t worry, I got us…” was all DeRozan had to say on Twitter following the departure of Chris Bosh in the summer of 2010. It was a tumultuous time for the team. Another franchise player had left town, and it seemed like the Raptors could be in for some rough times.

The first couple seasons without Bosh were rough, but in that time, one of the lone bright spots was watching the development of DeRozan.

Year after year, he came back better and better. His growth from a raw, athletic prospect, to high flier, to the NBA’s best mid-range scorer was a joy to watch.

Prior to DeRozan, there were hardly any players that were truly proud to represent the city. He famously stated “I am Toronto” after resigning with the team in 2016. It was only right that the fans reciprocated this sentiment by forever remembering him as one of the most beloved and greats to play for Toronto.

He and Lowry formed a dynamic duo in the backcourt and off the court, and that duo led the team to the east finals once, along with multiple playoff appearances.

DeMar will always have a spot among Raptor greats, as he was an exceptional player, but no one repped this team harder than he did.

Honourable Mention: Doug Christie and Danny Green. These two are extremely underrated, and I’m especially high on what Christie was able to accomplish with the Raptors.

Christie was one of the great three-and-D wings before they became so coveted. He made his name in Toronto with sharp shooting from deep and stellar defence that disrupted even the likes of Michael Jordan.

Danny Green’s lone season in Toronto was extremely productive, as he was one of the best three-point shooters in the regular season while also playing great defence on the other end. DeMar’s longevity and impact beat out Green and Christie here, but all of these guys are solid additions to a team with the greatest Raptors to ever play for the team. 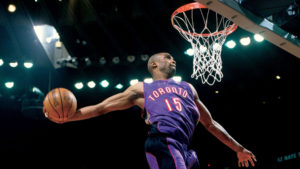 Vinsanity is what arguably saved the Raptors from the fate the Vancouver Grizzlies suffered. Carter was an instant box-office player that made the Raptors one of the most popular sporting teams in North America.

Carter made basketball popular in Toronto, a city that mostly embraced Hockey and Baseball as the popular sports. He will forever be linked to the growth of Canadian basketball, as the generation of Canadians in the league today watched Vince growing up.

Beyond his impact off the court, Carter was a gifted scorer, an athletic phenom, and that naturally led the Raptors to their first great era of basketball.

He was an all-star every year he played for the Raptors except his rookie year. Carter’s 2000 dunk contest performance is considered to be one of the greatest ever, if not the greatest.

Vince is surely a top-five player among all the players to ever wear the jersey, and he’s most definitely the most iconic player in Raptor history.

Honourable Mention: Morris Peterson. Mo’ Pete’s longevity and shooting definitely deserve to be mentioned here. He was a steady fixture in the mid-2000s Raptors, whether he was coming off the bench or starting.

He also had one of the most iconic shots in franchise history, as he hoisted up a prayer from way downtown to bring the Raptors to an overtime win against the Washington Wizards in 2007. 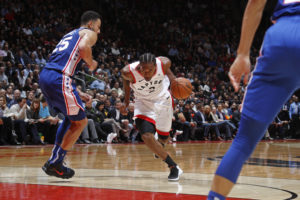 The Fun Guy only spent one year in Toronto, and yet it was one of the most memorable years ever for the franchise. Leonard was sent to Toronto along with teammate Danny Green in exchange for DeMar DeRozan, Jakob Poeltl and a future first-round pick.

Kawhi was a different type of force just by watching him take the court. The poise and silent confidence that came right as he’d hit his defender with a double double crossover into a mid-range jumper that would be nothing but money, it was poetry in motion.

He had a clairvoyance about him on the defensive end, seemingly having eyes behind his head that allowed him to make a steal while facing away from the ball. That level of defensive awareness and excellence had never been seen before, at least in Toronto.

If Kyle Lowry served as one of the best floor raisers for the Raptors, Leonard is the lone ceiling raiser that helped bring the Raptors to the very top of the NBA mountain top. You can take your picks for your favourite moment. The laugh? Iconic. The last laugh at the parade? Almost equally as iconic.

His poster on Giannis in the Eastern Conference Finals? That was the exclamation point for a series many called “over” after going down two games to none. His complete takeover in the dying minutes of a potential close-out game for the championship in Toronto? Oh what could’ve been.

The likely answer is “the shot.” You all know the one. Leonard catches the inbound and makes a beeline to the corner, fades out of bounds right as the outstretched arm of Joel Embiid attempts to make a game saving block. The ball travels through the air, for what seems like forever.

That shot, heard around the world. Those four bounces that had everyone between agony, despair, hope, and exclamation. Truly unforgettable. It was the moment of collective belief, that maybe, just maybe, the Raptors could win it all.

The euphoria and joy that season Leonard and the Raptors brought to the city will never be forgotten, and the best player on that title-clinching team would never be left off a list with the greatest Raptors ever.

Honourable Mentions: Pascal Siakam and Jerome Williams. Spicy P and the Junkyard Dog are some of the best forwards to play for the team. Pascal was also a pivotal piece in the 2019 world champs, and his career with the Raptors will only continue to unfold in the coming years.

Williams was one of the most tenacious rebounders and defenders for the early 2000s Raptor teams. His intensity and passion were crucial to a young team trying to navigate the growing pains of transitioning to NBA postseason regulars. 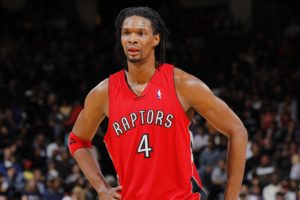 CB4’s years in Toronto have felt largely forgotten in recent memory, likely due to the sheer amount of amazing bigs in the 2000s, along with Bosh’s success in Miami.

Bosh was one of the top forward-centres in an era that included the likes of Tim Duncan, Kevin Garnett, Dirk Nowitzki, Shawn Marion, and Amar’e Stoudmire.

He was a 20-10 threat nearly every night, and he received the torch from former franchise player Vince Carter.

Bosh led the mid Raptors to the playoffs in 2007, and while they ended up losing to Carter’s New Jersey Nets, two close wins in a raucous Air Canada Centre were strong indicators for what was to come in the far future.

Bosh is the Raptors’ most dominant big man to ever play for the team, and the fact that he was among the best of the best in arguably the greatest era of power forward/centres, warrants his spot on this list.

Honourable Mentions: Antonio Davis, Marc Gasol, and Jonas Valanciunas. A trio of dominant bigs that led successful Raptor teams. Antonio Davis was an all-star for the Raptors in 2000-2001. Marc Gasol was the final piece that turned the Raptors into legitimate title contenders.

Valanciunas was an efficient and dominant post scorer when he got the opportunity. All three of these bigs deserve to be mentioned for this position. If it weren’t for the Raptors having DeMar, Vince, and Kawhi on the wings, one of these guys would surely start at the five.