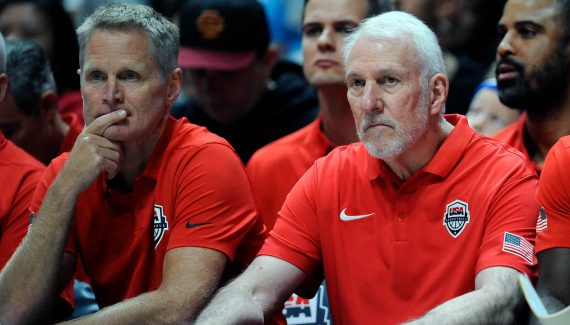 Gregg Popovich is moving on and USA Basketball is hoping to find their replacement sooner rather than later.

Still at the helm of the San Antonio Spurs, Popovich spent five years as the head coach of USA basketball, culminating with a gold medal win at the Tokyo Olympics. According to sources close to the situation, Steve Kerr, Doc Rivers, Nate McMillan, Monty Williams, Tom Thibodeau, Erik Spoelstra, Jeff Van Gundy and Lloyd Pierce have all been described as fits for the head coaching vacancy.

“Someone who understands and has a healthy respect for the international game,” said Hill on what he is looking for in the program’s next head coach. “The dynamics are a bit different in that environment than they are in the NBA regular season. You’re going to be dealing with some tough love of players, and being able to mentor them. That’ll check the boxes, if you will.”

The pedigree of Team USA head coaches is an impressive one as Popovich took over for college coaching royalty in Mike Krzyzewski. As is the case every year, the expectation for USA Basketball are gold or bust.

No pressure to whoever lands the gig.