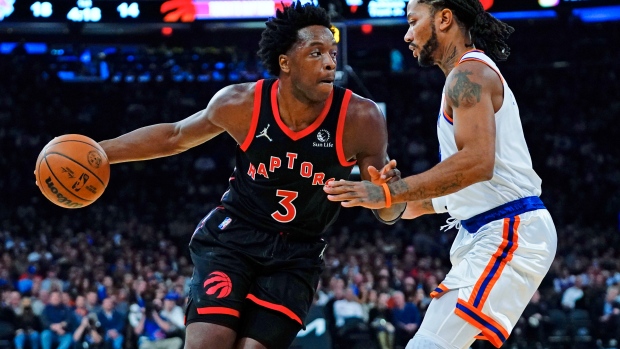 Undermanned Raptors Continue to Roll, Beat Knicks at the Garden

OG Anunoby had a game to remember.

On the 75th anniversary of the NBA’s inaugural game, Anunoby put together a career-high 36 point performance to help the Raptors avenge the Huskies by dispatching the New York Knicks by a score of 113-104

“The significance of that for me is I lived right up there by Maple Leaf Gardens [now Mattamy Athletic Centre] part of I think, my first year in Toronto, and now it’s a grocery store. I went in there and I saw the sign on the pillar [commemorating the event] and I was taking pictures of that, going, ‘Man, that’s incredible. That’s incredible. Like, I didn’t even know that, you know, when I was there nine years ago as a Raptors assistant. So hey, pretty cool. We’re (in) a rematch. I think we owe ’em one, don’t we?”

Despite playing without rookie Scottie Barnes, the Toronto Raptors were able to overcome a first half deficit thanks in large part to Anunoby’s strong night, but also huge performances from Gary Trent Jr. and Fred VanVleet who finished with 26 and 17 points a piece. VanVleet also added eight assists and nine rebounds, while Svi Mykhailiuk scored 15 points in a spot start in place of the injured Barnes.

“Hopefully, he understands that we believe in him, right?” said Nurse before the game, in reference to Mykhailiuk earning the start. “And for me, this is a long-term play with him. And understand we got a lot of confidence in him… he’s got a lot of tools, man. He’s got a lot of tools. He just needs to know that he doesn’t have to play perfect and even if he plays average, we’re gonna keep running them out there night after night after night and see if we can build some consistency.”

With the victory, Toronto has now won four in a row, and despite inconsistencies on the offensive side of the ball, the 5-3 Raptors  continue to play hard-nosed defense while crashing the offensive boards.

They will look to extend their win streak to five games on Wednesday night when they take on the Washington Wizards.