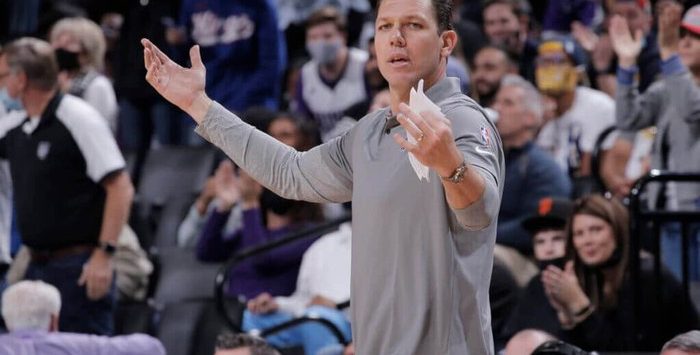 What is a year in the NBA without head coach Luke Walton on the hot seat?

Walton has been at the helm of the Sacramento Kings bench since 2019 and seemingly each season has run into some sort of controversy, whether through his own doings or otherwise. Nevertheless, the Kings have continued to show faith in Walton, despite their ongoing 15-year playoff drought.

That is until now.

According to sources close to The Athletic, the Kings have grown tired of waiting for everything to come together under Walton’s watch. The Kings have started the season 5-4, but have since lost four straight before finally picking up a win on Monday night against the Detroit Pistons. There is a strongly growing belief that if the Kings are unable to get their season back on track that Walton’s position as head coach can very much be in jeopardy.

Kings coach Luke Walton is likely to be in peril if Sacramento's slide continues, sources tell @sam_amick and @ShamsCharania.

The Kings are in midst of four-game losing streak heading into Monday's game at Detroit.https://t.co/kGcbyPxyvc

Walton has had numerous run-ins with players in the past, most notably Buddy Hield. This season, he seems to have already butted heads with the team’s former lottery pick Marvin Bagley who just about a week ago refused to check into the game when called upon by his head coach.

Walton still has one more guaranteed season left on his contract past this year and is owed $11.5 million through the end of his deal.