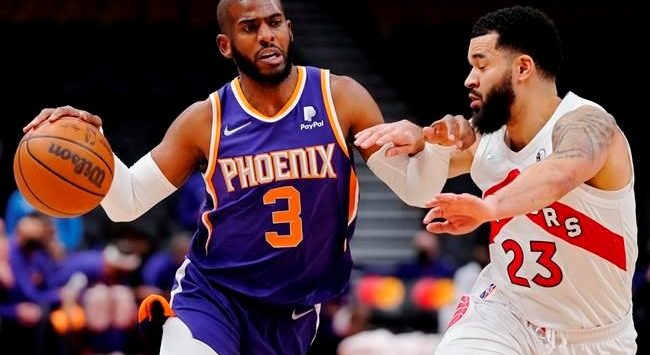 There may be no such thing as moral victories in sports, but last night was close to it.

Down Gary Trent Jr. and Scottie Barnes due to injury, the streaking Toronto Raptors battled hard all night against the Western Conference powerhouse Phoenix Suns, but came up just short at the end, falling by a score of 99-95. Their six game win streak may be over, but ironically, they saved their best game of this most recent hot stretch for Wednesday night.

“You just got to appreciate the fight, be proud of the fight,” said VanVleet, who finished the night with 21 points and five assists. “That was a really intense, tough game, That’s probably as good as it gets without a crowd in there. They certainly raised their level, there’s a reason why they have the best record in the NBA, it’s because they play that way every night. [But] I thought that we answered the call. I thought it was a good test for us. Obviously, we didn’t come out with the victory but you appreciate the fight.”

The Raptors received a number of noteworthy performances, including OG Anunoby who led all scorers with 25 points. Pascal Siakam had yet another strong all-around game, tallying 22 points, seven boards and seven assists. Meanwhile, Chris Boucher was a force off the bench, picking up 16 boards and scoring 13 points.

“He got ‘em today,” said Raptors head coach Nick Nurse of Boucher. “He was really, again, a big factor in the game, just relentless on the glass and it’s good to see He’s got some energy and he’s got some length, he’s got some springs and he’s using it so it’s good.”

Despite being forced to play with a short bench and Yuta Watanabe in the starting lineup, the Raptors showed incredible effort against what was a fairly healthy Suns team. The Raptors were able to hold superstar Devin Booker in check and made sure to keep the game close, giving themselves a chance to win it late.

“Well, I think that I wouldn’t say we played great the last couple of games, right?” said Nurse. “But we found a way to win and that’s the meandering through the league schedule. You’re not always going to play that great and then tonight, when you have to play really hard and tough against a really, really good team [you prove] that you can do it… So just continue to build that’s what I take from it. Just continue to build and [that] should give us some confidence.”

Keeping their heads high, the Raptors will look to start a new win streak as they take on the Detroit Pistons on Friday evening.